Putting ‘The Fear’ into Floaters – by Ricky Thomas

After a very busy month running the Elite Carp Angling Championships alongside catching tonsillitis, it was finally time to get back on the bank and catch some carp. I had been stuck in bed all through the hot weather, so as you can imagine all I wanted to do was to go fishing. On my next day off from the tackle shop, the plan was to get up to one of my syndicates and try push even closer to my season goal of twelve 30’s and a 40 in a single season from that one water.

My day off was on the Thursday and being a Monday I knew I had only 3 days to wait, by god I could not wait. To cut a long story short that day I was offered a place on a very quiet little syndicate that contained some lovely old English fish, alongside some uncaught unknown ones. Being close to home I would be able to fish every evening after work without too much travel and effort. 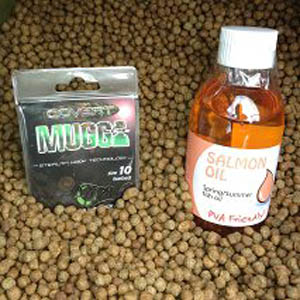 The Tuesday evening after work I planned to go down to the new lake and try and locate where the fish were hiding or patrolling. When I join any new lake there are always two methods I adopt to locate fish or their areas of residence. The first method is spending relentless hours using a marker float, mapping out the whole lake so I get an underwater picture off what’s below the surface. This knowledge will no doubt help me find the areas the fish could be using. My second and favourite method that I use to locate fish consists of walking around the venue firing floaters into marginal areas that I think could hold fish. Overhanging trees and dark shady areas I have found to be most productive in holding large numbers of carp. Hinders 6mm floaters soaked in salmon oil have become my number one choice for 90% of my floater fishing.

After a good few laps around the lake, I found two areas where the fish were feeding confidently on the floaters I had introduced. Not only did the floaters work in locating the carp it also allowed me to see the stock that the venue held. Moving away from the quiet corners of the venue (where the floaters were) I selected an area to pre bait regularly and heavily. As none of the previous members have adopted a heavy baiting strategy previously, I felt this could be a good edge to help me catch more fish. I selected two spots that backed onto the largest mass of vegetation and applied five kilos of Essential Baits 16mm B5 to each spot. I continued this heavy baiting strategy every evening until the following Sunday. 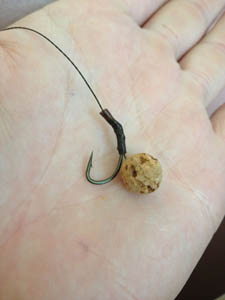 My day off finally arrived and I was ready to fish my first session on my new water. On arrival I topped my swim up with about half a kilo of B5, then went for a walk as I thought I would try my luck with some floaters. It was not long before I had the fish back up on the surface slurping down my salmon flavoured floaters. My floater rig was a cut down 10mm cork ball connected to a size 10 Gardner Covert Mugga whipped knotless to Gardner Tackle Vigilante. I added a small piece of Covert Shrink Tube over the eye of the hook to help the rig flip over and catch hold.

Having the fish only inches from the bank I saw the fish I wanted and lowered the bait onto its nose. The reaction was instant and within five seconds it slurped down the cork ball I was into a mid-double mirror. The centerpin went into overdrive, but the hook held strong and before long I had a scale perfect mirror on the bank. After returning the fish back to the depths, I made my way round to my main swim where I cast out both the rods. My rigs consisted of 15lb Gardner Sink Skin tied knotless knot to a size 8 Gardner Continental Mugga. My hook bait choice was a special 16mm B5 wafter that sank really slowly to remove the weight off the hook. The other rig components consisted of 4 foot of Gardner Heavy Plummet leadcore down to a simple Covert Lead Clip to which a 2oz flat pear was connected. The session was slower than I expected but on midday I had a vicious take over one of my baited areas. After a long fight I slipped the net under my very first bottom caught carp from my new water. It was an old fish known by the name Cut Tail. The fish weighed 23lb 12oz and being over 30 years old, it was a very welcome capture that will live long in my memory. 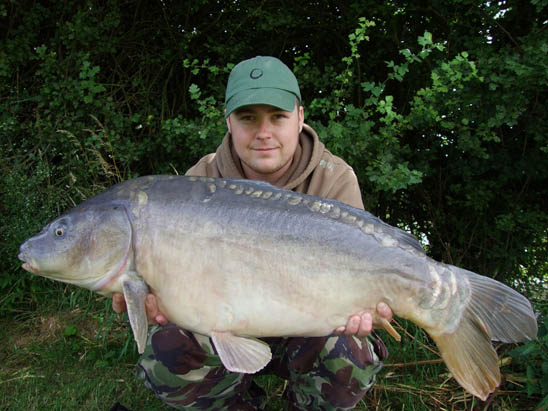 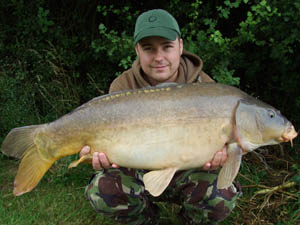 Cut Tail was the biggest of the confirmed residents that had been caught recently, so to get one of the biggest known fish on the first session was great. After only forty minutes of slipping Cut Tail back, I had another take off my other baited spot resulting in a lovely 19lb mirror.

Both fish were nailed smack bag in the bottom lip, a good sign that the rigs were working well. After the action the swim went dead and my first day session came to an end resulting in two lovely fish.

The next evening after work I was back down the lake to pre bait. I added 5 kilos of B5 to the spots I had the two fish from the previous day. With the bait loaded in, I made my way round to the spot I had caught the surface caught mirror from. With a few floaters left in my pocket I threw them in and completed another lap of the pond to look for any activity. On arrival back in my stalking swim I could see a few small commons slurping down the floaters I had recently introduced. 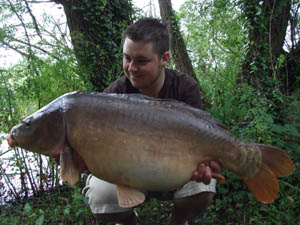 Luckily I had the floater rod in the car so I wondered back and grabbed it. Within two minutes I walked back to the floater swim with a bucket of salmon floaters in one hand and my stalking rod and centerpin in the other. I had no intention to fish that evening but after seeing the small commons I felt it was worth waiting to see if a bigger fish would make an appearance. Quiet as a mouse, I stood watching the fish feeding within feet of the bank. I held back as the fish became confident and at about quarter to eight I saw a bigger fish come through the treeline. Once I saw the large shape I knew that this was the fish I wanted to catch. Like all the other fish she came up and started slurping down the little floaters. I took full advantaged and slowly positioned my cork ball onto the spot where I thought her head would appear. The fish’s nose slowly rose to the surface and sucked in the cork ball. There was no need to strike and I lifted into the fish making sure I held the centerpin firmly to avoid giving the fish any line. After a long fight and several attempts with the net, the fish finally was nestled in the soft mesh off the net. I carefully lifted her from the water and removed the hook (which was buried in the lip with no chance of ever coming out). On the scales the dial settled on 26lb 12oz.

A new centerpin caught PB and I was so so happy. With no current record of this fish every being caught or being known, it looks like it’s one of hopefully many more uncaught fish.

A few days later I managed to catch Cut Tail again, this time off the surface from the same stalking spot I had the 26lb 12oz mirror from. As expected she was 6oz lighter, but after getting caught twice in a week it’s expected. My fire has been well a truly lit as I have seen a bigger fish feeding on the floaters, fingers crossed I can catch this big fish soon. Who knows how big that fish is, but there is only one way to find out and I can’t wait.