The start of this month was occupied by exams and revision. This was boring, but needed to be done before I was free from college work for 3 months. The exams went well, and I will get my results back in a few weeks, but it was now fishing time!

This year I was going to be able to fish the magical June 16th on my syndicate, so I went to the draw on the Sunday before the opening. I was lucky, and came out 4th and chose a swim right on the end of the big south-westerly that was forecast, and that had previous good form at the beginning of the season. In the week I had exams, so come Thursday night I was frantically tying rigs and sorting the rods so I was ready to go come midnight on the Friday. 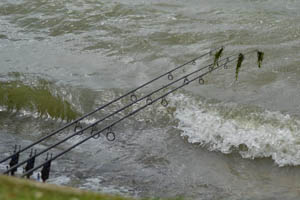 I arrived around 5pm, and dumped all the gear out of the car and got set up in the swim. The wind was much, much stronger than I had anticipated, and hitting the ranges required to get to the fish from the swim was going to be a nightmare! It was encouraging to see a few fish show at range, but there was a massive algae bloom happening on the lake, making it the colour of weak tea, and this had killed the normally abundant weed. This was sure to affect the fishing, most likely making the fish very spooky in open water.

We were allowed to use a marker to find spots, then spodding and casting in rods could be done from 10pm this year. After a few casts with a bare lead, I found a silty area amongst gravel at 140 yards, and decided this was going to be the spot, so got all 3 rods clipped up. There had been hardly any weed, and what I had found was dead stuff, so the long choddies I had set up were not ideal, but it was all I had with me! 10pm came round, and I launched all the rods out into the darkness, it took a few casts but eventually I hit the clip, and settled back for the night.

It was a very restless night with my alarms beeping every 30 seconds because of the strong winds and bits of weed drifting about. After all the commotion the fish seemed to switch off, and nothing happened for the rest of the weekend, but it was brilliant to be back! 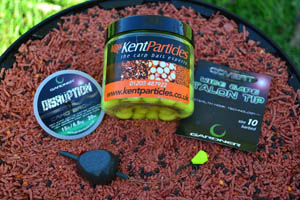 The next weekend was the BCAC, that I was fishing with Ryan Dyke for team For Life Experiences. We were fishing at Broadlands, and after having done a bit of practice we were confident that if we got a good draw then we would do well. We did a few laps of the lake before the match, and put the swims in choice of preference. Then it was time for the draw, and it really didn’t go well with us coming out 11th of 12, and getting a swim we really weren’t confident about catching from.

We worked hard all weekend fishing tight the island and to some pads, but we had our only bite on the Saturday afternoon. It was a bit nervy playing the fish, not for it being a fight for the top but a fight for the bottom! The fish turned out to be one of the smallest of the match at 6lb 12oz, but meant that we didn’t blank and would get some points for team FLE in the team competition.

My last session of the month was 3 nights on the syndicate. It had been fishing very slowly of late, but with both the big fish still due and the weather looking good I was confident. I had a quick walk round, but only saw a few fish in the big bay, before stopping for a chat with another member. He said he had seen a few fish show in front of swims 8 and 9, and while sat with him another few showed so we both headed for those swims. The bottom was baron of weed, but I did find an area of fresh weed at very long range, so decided to fish solid bags close to this. The fish were very active and a few showed right of the rods, but there were almost constant fly hatches going on, and I think the fish were pre-occupied with these. On the second night I cast a zig out, placed about a foot under the surface, but still the fish showed on or near the rods but I couldn’t buy a bite! 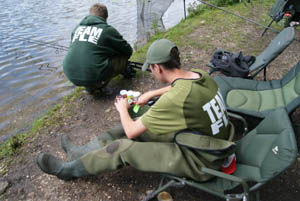 On the 3rd night the sun came out, and the fish were very evident in the big bay, so I decided to move up there. I was sat with another member who was fishing in the bay when he had a screaming take, and landed a 28lb mirror, which was nice to see. I had a go at some fish on the surface, and messed up a chance with what I think was the lake record common at very close range. I had flicked a fake mixer into its path and managed to catch the line in an overhanging tree, so when the fish took the bait I struck and lifted the bait out of its mouth! With my tail between my legs I decided to get the bottom bait rods out as the weather changed, and the wind picked up.

Quite often when the fish are in the bay and feeding, they cloud up areas by ripping up the bottom. I had found one of these areas and flicked out 2 chod rigs onto the area, slackened the lines off, and left the alarms off while I put the brolly up. Ten minutes later I looked back at the rods, and the right hander was bowstring tight! I quickly lifted into it, but the fish was weeded solid, and after about 10 minutes of pressure, a big ball of weed came in, no longer with a fish attached to my hook! Nothing else happened during the night, so I decided to come back the next week more prepared and was going to remember to turn my alarms on this time!

That’s the end of my fishing this month, unfortunately with not alot caught! Next month I will be fishing my syndicate a lot more, and will hopefully bag my first of the year. I will also have the UK Carp Cup semi-final on Brasenose 2 which I am really looking forward to.