After a busy day coaching the van was loaded and we were heading to Warwickshire in aid of the 2012 Carp-in-4-Cancer event. We fished in the event last year and actually managed to win with the added bonus of also taking away the biggest fish trophy.

This year we would be defending our title on the fantastic Bishops Bowl Fishery Mitre Pool. I have fished this lake on a few occasions in the past and in some instances done extremely well, these usually coincided with fishing against the old quarry wall from peg 15. It gives the opportunity to fish tight to the wall on a shallow ledge and when the wind is pushing towards it or the pressure builds on the lake the fish tend to end up here as they feel safe due to the fact it is a tricky cast for most anglers due to the big overhanging trees and the small size of the ledge.

On stepping out of the van and looking over the lake we both instantly knew we needed swim 15!  The wind was really pushing the white horses into the wall with some aggression, as our eyes turned and focused on the lake again we saw a fish of around 16lb poke its head out tight to the wall in peg 15. Anyway we spent the evening walking the lake and sorting our swim order before retiring to tie more rigs etc. and get a good nights kip.

The following morning we did a few more laps just to triple check and made our way to the draw. The first name came out of the hat and the pairing choose peg 15, what a surprise! I was giving the gutted face look to Graham and hadn’t heard our name being called second out the hat! Every other draw we have had this year has been second to last out not second!! We choose peg 1 the peg opposite to peg 15 that also commands half of the quarry wall. We had only fished the peg once and had suffered with quite a few cut off’s but thought it was worth a gamble considering what we had seen.

We quickly set up and sat watching the water in preparation for the hooter. Our approach was simple solid pva bags incorporating drop off inline leads on Plummet Leadcore leaders of around 6ft. At the business end we used short 25lb Trickster Heavy hooklinks and our ever faithful size 10 Covert Mugga hooks. 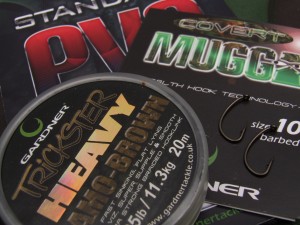 For bait one of the awesome CC Moore mini bitez pop ups was attached to the hair and for the bag mix we used a mixed size of trout pellet and added some of the slicking booster liquid to each bag in the hope of drawing fish from all levels of the water. Most other pairs spent the time learning what they had in front of them and baiting how they hoped best, during this time we saw more and more fish showing along the wall in both ours and the opposite swims water.

At mid-day the hooter sounded and we were soon slamming solid bags tight to the quarry wall where we had seen fish showing. We fished with our rods on storm rods locked up tight as the owner informed us it was snaggy in areas. With two rods on the money the third went in to the reed fringed margin to the right. On clipping the bobbin on that rod the first that was cast pinged out of the clip before the tip pulled down. Graham was on it in a flash and all seemed to be going well when all of a sudden the line fell slack and all was lost. Upon inspection the line had been cut clean above the leader but there was no time to think about that as the rod need to be clipped up and go back out. Within seconds of it being back on the spot the same thing happened again only this time going through the leadcore, the process was repeated once more only this time I hit the take. 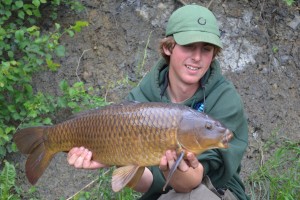 I bullied the fish keeping the rod high and managed to lead the first fish of the comp safely in to the net.

At 11lb it was a welcome start and the rod was repositioned seconds after netting the fish by simply cutting just above the leader and attaching a new one with a pre-tied bag.

Moments later I had a take off the rod in the margin resulting in a rather odd looking 6lb koi! A little strange, but a welcome 6lb on the score sheet. 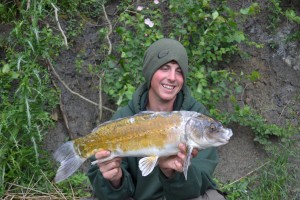 Over the next few hours we suffered a further six losses due to cut off’s. After the first two we had added 30ft snag leaders but this made no difference, we even tried some kevlar coated leader material that a neighbouring pair had with them this to was instantly cut through. We tried various spots along the wall but nothing worked it seemed it was littered with snags that were covered in zebra mussels!

We tried fishing short to avoid the snags but had no luck in the deep 20ft+ water. 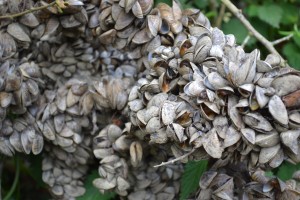 At this stage of the competition we were in 1st still but only by a marginal 2oz! Other pairs around the lake were catching and we started to sweat. We continued loosing fish throughout Saturday, after a quiet night we had fallen in to second with one fish in it for the top three pairs. Nothing we did seemed to work, the only place we could get bites was in the danger zone and the constant loss of fish was really getting to us. We sat back for a while with the rods wound in and had a thought about it  and decided the best bet was to move the rods off the wall for the night away from danger with the hope the fish would push in to the deeper water at night and feed. I also decided to switch to a choddy on my right hand rod against the reeds and catapult single 18mm Odessey XXX over the top at regular intervals with 5 baits every hour or so.

We went to sleep around midnight with nothing else having happened and feeling a little disheartened for our efforts, the only good news was that no one else had banked any fish either. We were awoken at around 2am by a screamer on my rod against the reeds and Graham was on it before I had the chance to open my eyes!! After a nervy battle the fish was in the net and weighing in at nearly 19lb it was the biggest fish of the comp so far and we presumed that it would have put us in 1st. The marshal informed us that other leading pairs had also caught and there was one fish in it for the top three but wouldn’t tell us the positions and revealed they were keeping it a secret as it was so close.

To say we were a bit taken back by everything was an understatement and all sorts of things started running through our heads! As it was now 2.30am we decided to wait up with a cuppa until it was light in an hour or so with the hope of seeing something. We saw a few carp poking their heads out in the danger zone so when it was light enough we decided on one last push to try and bank another carp from the wall. We put the rods about 6ft in the air on storm rods locked up hoping if we kept the line angle even higher we may be able to steer any offending carp clear from the zebra mussel lined snags. Soon after casting out we received a violent take on the left hand rod resulting in another cut off! This happened four more times before 10am with only two hours to go and one fish needed for any three pairs to secure victory. The only hope we had was if the choddy received another take as we had landed both fish from that spot previously and sure enough five minutes later the Neville was singing its sweet tune. Graham picked up the rod as I was in the middle of re-tying some solid bags to keep as spares for recasting and instantly said something didn’t feel right. He was slowly gaining line on the fish and it was looking good when all of a sudden the tip sprang back as the line parted.

The Final hooter sounded at 12pm and we had lost six fish from first light and a total of eighteen fish over the weekend. We still had no idea of our position and made our way over to the presentation. It was revealed that we finished in third just 18lb behind first place, we were gutted to say the least as we had received more takes over the weekend than there were fish landed! Graham picked up the Joe Herrington Memorial Trophy for the second year on the bounce for biggest fish, that also makes it two years on the trot he has won it by landing a fish on one of my rods!!!! 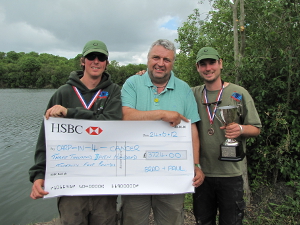 It was a great weekend yet again and £4200 was raised for a great cause and we are hoping to regain our title next year so watch this space!