May Blog – by Calum Kletta

This month, I was again swamped by college work and exams and only had time for a couple of quick overnighters and my UK Carp Cup Qualifier. I therefore decided to try and make the most of my time and practice for the match. It was being held at Coking Farm fishery, on the heavily stocked Long Lake. 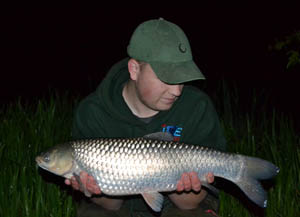 The first session was a 24 hour trip with my dad! We turned up in incredibly cold, blowy and rainy conditions (which stayed for the whole time!) and set up, me fishing the open water, and dad towards the middle island. I started by spodding out a large bed of pellet and then fishing 3 rods with solid bags over the top, with small, bright pop-ups. It took about 3 or 4 hours for the first action, which was a bit worrying on this lake and signalled I may have the tactics wrong! After that however, the action was quite consistent and I even managed a grass carp during the night. 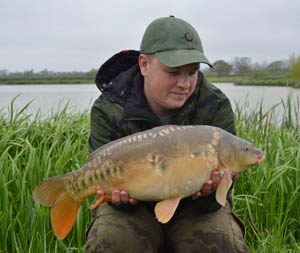 In the morning, I decided to try a bit of Kent Particles Salmon Oil in my bags, creating a big slick. It worked brilliantly and I was getting double and triple takes! I must have ended up with around 20 fish up to around 12lb, but in truth lost count!

The next session was the Wednesday before the match, only a quick overnighter as I had college the next morning! I had cleared the freezer of boilies, and had about 5kg of mixed 14millers, the plan being to fish solid bags with a boilie tipped with corn then putting large amounts of boilie over the top.

The lake was empty again, so I thought I would go in the same swim as last week to compare the results. It only took about 15 minutes for the first bite to come, and the action was hectic from there! I ended up reeling in at around midnight to get some sleep, having caught about 30 fish through the day! I was now really confident with my tactics for the match, and just hoping for a good draw!

The night before the match was spent frantically getting everything prepared and trying to tie some rigs, as well as doing a 2000 word assignment for college, before trying to get some sleep! I then arrived at about 1pm, and went for a walk with my runner for the match Ryan Dyke, and Ralph Sweetman the bourbon supplier (he brought 10kg of bourbons!). The fish looked like they had just finished spawning, and were evident everywhere on the lake.

There was a walk around for all the anglers at 2:30pm showing the swim boundaries, and the draw was at 3pm. I put the swims in order of preference, and hoped my name would come out high! Fortunately, I came out second in the draw and got my first choice, Peg 4. 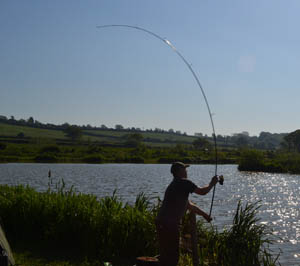 It was a long walk from the car park especially in the intense heat wave we were having, but eventually we were all set up in the swim. The swim gave me an island margin, and a large area of open water. I thought that the island would be the banker rod, as the islands on this lake are very productive. Then I was going to fish 2 rods in open water over large amounts of boilie as I had practiced.

The hooter sounded at 6pm, and all the rods were quickly cast out and about 1kg of Mainline Cell rolled by Kent Particles was catapulted to the spots, I was going to keep the bait going in little and often to draw fish into the swim and keep them there. The first bite came after about 15 minutes, from the island, and turned out to be a common of 8lb! The action was hectic from then on, and by the first scoreboard update at about 11pm I had 10 fish for 61lb, with 2nd on 34lb. 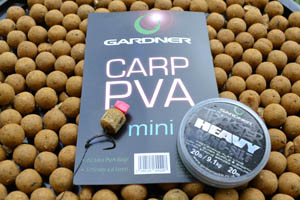 I stayed up through the night, and it paid off with another 6 fish, pushing me up to 110lb while second had only had 1 or 2. However, as the sun got up the fish moved away from the open water and onto the shallow island margins. The people around me started to catch much more consistently, and I started to get worried. I decided to really concentrate on the island rod, getting it really tight with every cast.
This paid off, and I started to catch consistently on this rod, as well as picking up fish from open water as well. I knew I had quite a big lead already, but if I could keep picking up fish, I would start catching well in the evening and Sunday morning. 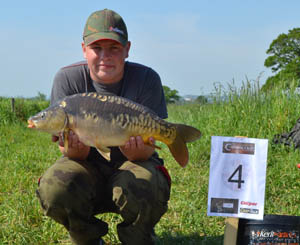 As the evening approached, and the temperature cooled, I started to catch a few more and gained a lot more confidence. At the evening scoreboard update, I was on 194lb with second on around 140lb. I caught a few more, before deciding to try and get a couple of hours sleep and then get up at first light and start fishing properly again! 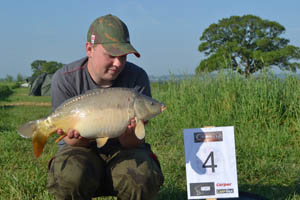 I however slept through my phone alarm, and was woken by a screaming Neville just after first light. From then on, it was crazy and between 5 and 10am when the final hooter sounded I caught nearly 100lb of fish! I was running out of boilie, having used nearly 20kg and solid bags after nearly using 200! My hands were covered in blisters and I was seriously sleep deprived, but I had won it! I am now through the semi-finals being held on brasenose 1+2 at linear in July, which I am really confident about having fished them so much!

Next month I have lots of exams at college, but with the magical June 16th approaching, I should be back on my syndicate and I have the BCAC for Team FLE at Broadlands lakes!