A GOOD DAY by Ricky ‘the Fear’ Thomas

After having a day off work at the tackle shop due to the bank holiday, the plan was to go out and get a feature done on one of my local club waters. When I woke up that morning I found myself thinking about staying at home due to the amount of anglers that I thought would be on the water. Soon the idea of doing the feature faded away and a day of working on my up and coming event became apparent. Whilst having an early morning shower I received a message informing me that one of my syndicate lakes (that I thought would have been heaving) was sparsely populated with anglers. As soon as I got out the shower, I was in my car making the journey to the lake. Once I had arrived, I found few cars in the car park, indicating that most of the other anglers were under the same presumption.
After walking round I found the fish and I quickly set up in the swim I had previously had a great session from. Already knowing the productive spots and seeing fish within the vicinity, I quickly landed my lead on the small dinner plate sized spots. As soon as I cast the right hand rod out and felt the lead touch down, before the fluoro foam reached the surface I felt I small tug on the rod, and I was into a hard fighting mid double mirror. I was amazed that I had hooked a fish in less than ten seconds and after a short fight the fish was slipped into the net. After a quick check over, I safely returned the mirror back to her watery home and proceeded to land both my rods on their spots. Once the rods were positioned in the correct locations and presented perfectly, I went about adding half a kilo of Essential Baits, 16mm Shellfish B5 and a selection of Hinders pelletz over each of my spots. My rigs consisted of size 8 Gardner Continental Mugga hooks tied to 15lb Sink Skin hook links. 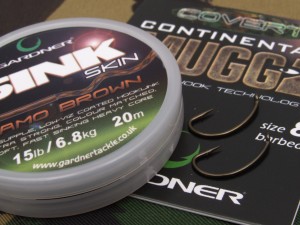 My hookbait choice was one of my special B5 hookbaits that have been glugging in a secret solution that contains the amazing Hinders Betalin.
After about an hour I saw a small fish role over my right hand rod and no sooner as I had picked up the bins, I was into yet another small mirror. Regardless of size, it was a great start and I was over the moon to land two fish in quick succession, especially considering the lake was not fishing that well.
As the heavy rain clouds slowly floated behind me and the sun started peeking through the grey sky, I had a vicious take on the right hand rod. The fish powered around for what seemed an eternity before it finally conceded defeat and was lying in the soft mesh of the net. After removing the weed I could see a lovely looking fish that tipped the scales at an ounce over 28lb. I was over the moon with the capture as with the exception of a few fish, the lake had been producing its smaller inhabitants like the two I had earlier that morning. 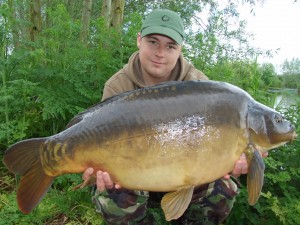 Ricky with a 28lb 1oz mirror

Everything was all going well until I realised that in my rush to get out the door that morning I had forgotten to pick up anymore bait. As a result of my stupidity I had no bait to top up the swim, so I was given no option but to fish my single special hook baits on the spots. Looking back I’m confident that if I had more bait with me I could of avoided the yet to come slow afternoon. After catching a 28lb 1oz mirror, the fishing slowed up considerably and with no bait and more anglers appearing I felt I was starting to fight a losing battle. Still with 100% confidence in my rigs, bait and location I decided I would give it until dusk before heading home and getting some rest before the bank holiday rush on Tuesday. As darkness started to fall I was treated to some freshly cooked chips from a friendly neighbour who had decided to go down the chippy (cheers David). We sat enjoying our chips, while discussing the lakes lack of afternoon action when I heard a selection of indications from the right hand buzzer. After watching the bobbin hit the floor, the line became extremely slack and I was in. I wound down and lifted into a very powerful fish that proceeded to run me around for a good fifteen minutes before letting me see any sign of what I had hooked. The fish keep close to the bottom while smashing through the fresh weed growth. It was a heart wrenching moment when the fish saw the net and powered off. After what seemed an age later and numerous netting attempts Dave finally slipped the net under the hard fighting machine. From start to finish the fight must have lasted twenty five minutes and my arm was aching like never before. We got the fish on the mat and like I already had predicted the fish the size 8 Continental Mugga was smack bang in the bottom lip with no hope of coming out. We weighed the fish that could be best described as a tank weighing 30lb 5oz. 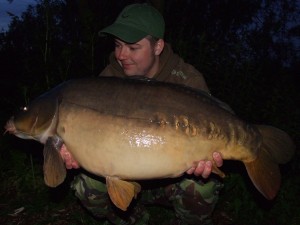 I was over the moon with the session, landing my sixth thirty of the new season, helping me well on my way to achieving my goal of twelve thirty’s in a single season from that venue.

All in all it was a great day and I’m glad I decided to make the effort and go fishing than doing the much needed work at home.
Rick ‘fear’ Thomas