As the midday sun broke through the dark rainy sky I made the short walk from the now water- logged car park down to the lake. Walking round the venue, it was evident that the lake was not fishing at its best however, on a positive note a good mate managed to land a small mirror during early morning. After a long chat with each of the anglers, I managed to eventually get to my chosen swim where I speedily got all my kit sorted before Mr Weather man said it was going to rain. The weather was perfect and with the air pressure dropped like a stone, it was looking good. After catching a few fish including a stunning 30lb mirror the day prior, I was quietly confident that I could snag a few today. 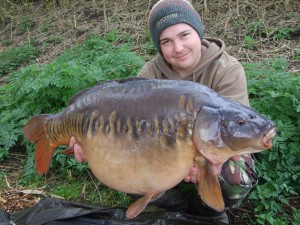 I was hoping the fish would have had a good munch on the bait I left them last night. I Had to make a very swift sortie back home after mother nature let rip and conveniently a certain small mirror on steroids kept me in the pouring rain for twenty minutes, resulting in me getting so wet and cold I nearly caught pneumonia. With the gear all sorted, I went about hitting my baited spots as the strong south westerly wind hacked into my face. After what seemed about one hundred casts and a bag of Gardner flouro dissolving rig foam later, I eventually managed to get both my rods on the money. It’s important to highlight that the spots I needed to hit were the size of a dinner plate and with me being mega OCD about getting the correct line lay and feeling a drop, it took a while. It became very apparent to me that a foot or two off the spots could cause me to really struggle for a take, so it was important to make sure that the lead landed bang on the money. My right hand rod sat in a small spot in amongst some weed at about thirty yards, tight up against an island boarding an out of bounds area in about six foot of water. The left rod was fished on a very clean area on an island shelf. Once set up I went about applying a quarter of a kilo of Essential Baits 16mm Shellfish B5 to each of my rods, with the intention of consistently adding the same amount after every fish, if I was lucky enough to catch one.

Recently I had been adapting my rigs so they are different to what the other anglers have been using on the lake. One of the rigs that has been so successful contains a super sharp Gardner Covert Mugga Hook with the amazing Gardner Disruption hook link, tied in a way that looks crazy but really works. Nearly all of my end tackle is now Gardner as I feel it offers great quality and it’s what I feel most confident using. The rig consists of a flying backlead, which sits on top of a length of brown Gardner Tungsten Rig Tubing. I favour a lead clip arrangement using brown Gardner Covert lead clips with the tail rubber pushed lightly on the clip, which allows the lead to release on the take. The tubing was dotted with large amounts of Gardner Critical Mass putty at eight inch intervals, this allowed the already heavy tubing to be even heavier helping to conceal my rig further. After the lead clip, was a short 6 inch section of Gardner Disruption hooklink to a size 6 Gardner Covert Mugga. 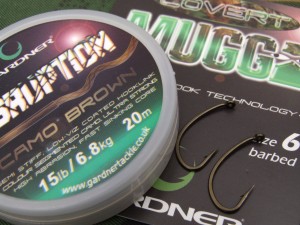 The business end was one of my little special hookbaits that I have made that is critically balanced, which contains a few of my favourite ingredients and additives that complement the bait I am using. I kept chopping and changing my rigs from a more comely used combi rig with my little tweak, then when the lake went quiet I would recast with my special rig.

The special rig that I have been using for a while has landed over 50 fish and as yet has not dropped me a single fish so fingers crossed it could be a winner. There are a collection of things I did completely different in this session including using a new rig for every fish to ensure the best hooking potential and hook sharpness , baiting up in a different way (not the amount but how I spread the bait). I think the difference in baiting strategy helps draw the fish out from the out of bounds area and onto my bait.
Rigs play a massive part in my fishing and as I think anglers, including myself, get ‘done’ on a regular basis, it can only help in being precise when making the little traps. Doing this can improve our chances of landing every fish that picks up our bait and at the end of the day, I think that’s the ultimate achievement.
It took about three hours to get my first take and by darkness I had already landed five fish that consisted of three twenty plus mirrors and two doubles. I have taken the time recently to write down the catch times from as many anglers in as many situations as possible. This has helped me to understand the fish’s movements around the lake. If the fish are constantly moving around it’s a massive edge to be one step ahead and get a lovely bait like the B5 right on money just before they swim past.

As night fell I switched my rods onto the night spots which I had been baiting throughout the day with a particle mix. One of the hardest things to do is to reel your rods in from a spot that is consistently producing, but I think by letting the fish come onto your baited area and have a free feed, only increases their confidence in the area and makes it easier to catch off the spot in the future. The particle mix consisted of a selection of “Hinders” Little Gemz Pellets, the Awesome Salt and Chill Hemp plus a few added specials like my old favourite solid belachan.

As it became dark I spread about five kilos of my mix alongside another kilo of B5 over the two rods I had cast to the island. I also made sure every time I woke during the night I added a few more pouches of boilies out onto the island spots. I consistently fed my spots like a matchmen, as I hoped it would encourage the fish to revisit the baited area in search of more food. This was the first time I had let the fish have a free feed on a large amount of bait. I put it down to this very reason why the next morning was so amazing and developed into the best days fishing of my life. Through the night I managed to land a further three fish, action I was not expecting.
On sunrise the next morning I changed the rods from my night spots back out to day spots towards the island. Almost instantly my right hand rod started to give me indications that the fish were feeding hard on the spots. By nine in the morning the right rod just starting producing more fish than I could have ever imagined. I feel that this was the first time I have had a large amount of fish actively competing for food and that could be why the fishing was so consistent. To be able to hold a large group of fish was a first and now understanding their patrol routes, I hope I can repeat this in the future. Sometimes it was taking less than five minutes to get a take and on one occasion I had two fish in the net at once. 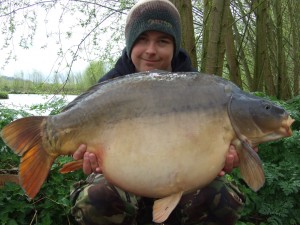 I maintained my baiting strategies all day until I was truly beaten and out of bait. In the space of one day I managed to bank 15 fish. Amongst these was a new 32lb 5oz mirror that had never done 30 before, and a lovely 29lb 13oz mirror that showed clear signs that it had been scoffing the B5.

It was an amazing session where a consistent but different baiting strategy alongside amazing bait and tackle and with a bit of individuality it all came together to create a session of a life time. 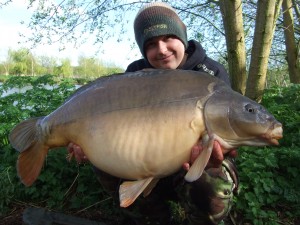 In total I had 23 fish in 24 hours breaking my syndicate record for having the most fish by a single angler in a 24 hour session. To me it’s not about breaking records as I fish for my own enjoyment but to have a piece of history on my syndicate is quite pleasing. Of those 23 fish, 14 were between 20lb and 25lb, 11 were 16lb plus and the best a 32.5 mirror and the 29.13 mirror. It’s been a truly amazing last three weeks for me and after my session of a lifetime it’s a nice point in my life to start my new job at Somerset angling. I’m very fortunate to have landed four 30’s, over twenty different 20’s and over twenty doubles all in only three single 24 hour sessions and one day session. All fish were caught from an area of the country that holds very few big fish (Somerset). I am back working in the trade I so dearly love and I hope that I continue to enjoy my fishing as much as I do now and if the odd big fish comes along then what a bonus.

While writing this piece I have just been asked to join Team Gardner so it only fair to say a MASSIVE thank you my newest sponsors Gardner Tackle. Thanks guys for making awesome kit that I’m sure I could have not done without, you have made one of my dream come true so I am eternally grateful.