With the end of the season looming and a lovely mild spell of weather I just had to have a concentrated effort on my local River Loddon in search of monster chub. Tactfully I had saved some holiday especially for the occasion and I hoped that this would pay off in spectacular style. A big chub was firmly in my thoughts and with this in mind I started priming a swim every other day with a mixture of hemp, dead maggots and 4mm elliptical pellets from Sonubaits. I carried out two after-dark baiting missions before deciding to fish. The stretch in question is a tricky, low-stock big fish stretch of the river and I hoped that by baiting I would be able to concentrate the fish and gain their confidence before presenting a rig. 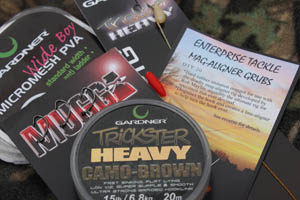 Arriving after dark, straight from work, I settled into the swim, set up the kit and soon had two rods positioned mid river; one positioned on the bait and one just below to intercept the fish as they moved upstream to feed on the baited area. Both rods were rigged up using a trusty mag-aligner rig using a long length of brown 15lb Trickster. An Enterprise Mag-Aligner Grub slid over the shank of a size 12 Mugga hook creating a deadly line-aligner effect. Each rig was finished off with a large Micromesh PVA bag containing a third of a pint of white maggots.
How could any big chub resist?

In the early hours of the morning the downstream rod pulled over and after a typical big chub fight, where the fish tried to snag me in the near bank margin, a good fish weighing 6lb 13oz was soon being slipped back into the river. A good start, however, the rest of the early hours remained quiet. I did hear a couple heavy rolls from the big fish that inhabit the stretch, which gave me confidence that the bait was doing its work.

I kept the bait trickling in between trips and on my next two quick overnight sessions I heard fish rolling 20 yards downstream of the baited area, just above small snag. I was sure the fish were feeding on the bait most nights, but with extreme caution.

During my next trip, which consisted of a short evening session, I decided to fish opposite the fallen branches as I was sure this is where the fish were spending most of their time. As darkness fell a couple of big chub rolled right over the rods and I was confident of a bite. Just before 9pm the upstream rod pulled over and after a good tussle I knew that this was no chub but a barbel weighing just short of double figures. After slipping the fish back into the water I baited the swim once more before returning home. 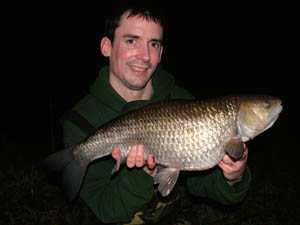 Looking at the long range weather forecast, conditions looked spot-on and I booked the Friday off work with the aim of getting straight down Thursday evening. Setting up in the dark, I repeated the procedure as before and after an hour of casting the rods the fish were rolling over the bait. Soon after 11pm I had managed four bites, missing one and landing several fish weighing 4lbs, 5lb 3oz and a monster weighing 7lb 10oz. This was my fourth 7lb plus chub and my second from two different rivers in 12 months. The fish soon spooked and I fished a couple of more all-night sessions without action or hearing any roll before deciding to call it a day. 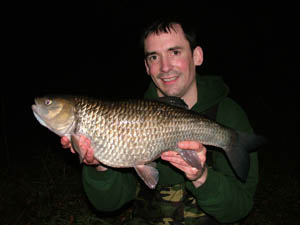 After getting my chub ‘fix’ I fancied a concentrated effort on the River Kennet going after a couple of big barbel I had seen there in the summer months. I made sure to keep visiting the short stretch throughout the winter to keep in touch with the place. Once again I started trickling the bait in and fished four evening sessions without a pull to show for my efforts. This is one stretch that I aim to return to next season to settle the score.

By this time the season had ended and I had a couple of features pencilled in that needed completing. I have just started a new series with Total Coarse Fishing magazine on how to target specimen fish. The series involves targets set for six individual species with carp and perch being first on the hit list. A 20lb carp was top of the agenda and I headed to Thorpe Lea Fishery with the aim of getting plenty of bites and hopefully slipping the net under my target. The session went to plan and after getting a good bed of bait out, the fish were soon attracted to the sound of the spod hitting the surface of the water. I managed to take 18 fish in front of the camera including my target weighing 23lb 10oz.

Next on the list was bagging a big perch with a 3lb fish being the target. I knew I was up against it from the start and combining blue skies with temperatures exceeding 20 degrees C I wasn’t confident at all. If there was one place in the country that would give me half a chance it was Stream Valley Lakes in Sussex. Arriving at 7am as the fishery gates opened I soon had three rods cast out with king prawns, a deadly big perch bait. Just as the sun began to rise in the sky the bobbin on one of the rods slowly crept towards the rod blank. Playing the fish carefully, I was soon netting a fish weighing 2lb 2oz, a good start but not my target. Soon the sun was high in the sky which, made fishing difficult and I had to wait until the sun began to dip behind the trees on the far bank before I felt I had another chance. I recast the rods with a new prawn soaked in Enterprise Tackle ‘Worm and Shrimp’ flavour before introducing a couple of spods of chopped worms, prawns and maggots over each rod.

An hour passed before I started getting indications that maybe things were about to happen. Shortly after, the bobbin on the right hand-rod confidently pulled up to the top and a strike was met with solid resistance. From the start the fish didn’t seem anything special until it neared the margins and after a good tussle under the rod tip the fish broke the surface revealing its size and I knew I couldn’t afford to make a mistake. The fish was soon brought over the waiting net and I can’t say more than grab a copy of the May issue of Total Coarse Fishing to find out more…