This month I have been swamped by assignments from college, but I put the hard work in, and hopefully should get some good grades!

The first bit of fishing related stuff this month was that I managed to pass my level 2 angling coaching qualification! This means that I can help the club that I currently coach for even more, helping youngsters from the local area, but I am also looking into starting to do individual carp tuition sessions.

With 3 week’s off college for the Easter holiday it would have been rude not to do a bit of fishing! The first session I did was 2 night’s on the Carp Society’s Horseshoe Lake for my friend Benedict’s birthday social, with all the guys from the BYCAC. Only 2 people caught carp (Brad catching a lot!) and I drew a blank! It was a good social which made up for it a bit!

The next session was going to be 4 nights on Yateley Sandhurst Lake. I was going with my mate Will so even if we struggled it would be a good social! I had been to Sandhurst for 4 nights before, both times the weather took a major turn just before my session and resulted in a blank, and I was determined to change that this time. The weather for the first day was really “carpy”, with low pressure, south westerly winds and rain. 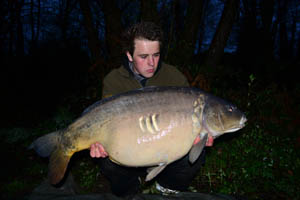 We arrived to find the lake very quiet, so after a quick walk round we saw a few fish show in front of the vacant Pipes and Second Pipes swims. Seeing as Will had the first choice of swims the last time we fished together, I chose to go in the Pipes! Within about 4 hours I was regretting that decision a bit! Will had cast 2 solid bags at showing fish and had been reward with a pb bream of 13lb 7oz, a pb common of 30lb 2oz and a pb mirror of 35lb!

I was having a nightmare sorting my rods out, having to re-spool my reels and not having any rigs tied! Just as it got dark I did have all 3 rods out finally, and was very confident of a bite. All rods were rigged up on my favoured maggot and corn rig, with 3 spombs of maggots over the top, fishing on silty spots on this mostly gravel bottomed lake. 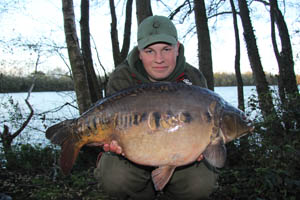 It didn’t take long for my first bit of action, from one of the massive Sandhurst bream! Unfortunately this set the trend for my night, having 4 more! Eventually though, as it got light the right hand rod screamed off and I was connected to my first Yateley carp! After an epic battle I managed to slip the net underneath it, a stunning 23lb linear was a lovely way to get off the mark. 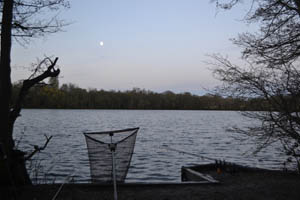 The weather changed through the first day, as a high pressure front came in and it looked less and less good for a bite. I decided to leave the rods out until around midday, then reeled them in and put out a few zigs. However, more and more fish started to show further down the lake, but this coincided with the lake becoming more busy which meant that we wouldn’t be able to move swims, which was more than annoying!

We kept plugging away for the next 2 nights, but apart from the relentless bream (I think I had 13 in total, most being doubles!), we didn’t catch any carp. The carp had now moved in numbers to the middle of the lake, and were steadily being caught by other anglers- which was getting more and more annoying!

On the 4th morning 3 fish showed in quick succession at about 100 yards out from my swim, so I quickly reeled in my left hand rod and cast a single pop-up onto its head. The cast went down with a soft drop, which is what I had been told to look for by a lot of regulars so I was really confident of a bite! The hours passed by and it was looking worse for a bite, when the alarm beeped- and I had another bream. As I was re-doing the rod a venue regular walked past and I got chatting to him, he said that white pop-ups had been doing the business for him, so I took the yellow one I had on and replaced it with a trimmed down Kent Particles White Chocolate one. I cast it back out to the spot and re-did the other rods for the night, sticking with the maggot tactics, but using white corn instead. 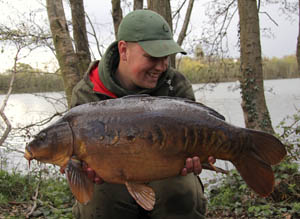 The night passed quietly, but at first light I was up and wandered into Will’s swim, but halfway there I heard a few bleeps from my swim and what sounded like the clutch going. I ran back to find the rod with the white pop up on nearly dragged off the rests and screaming off. After an awesome fight, I slipped the net under an stunning 21lb mirror! 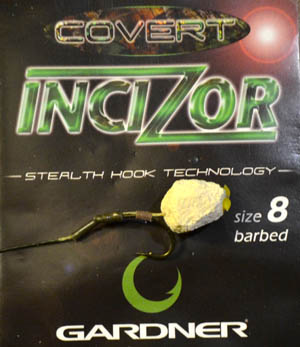 I decided after that to change all rods to fish with the balanced white chocolate pop ups. I was using size 8 Incizors with a long bit of shrink tube, and it had given me a solid hookhold. I was also using a small PVA mesh bag containing some crushed Cell and Kent Particles 2mm halibut pellets to just add a bit of smell as well. 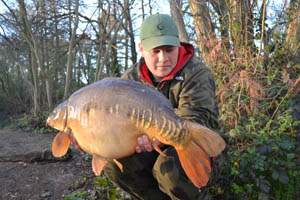 The weather was quite hot that day, and it passed without any more action or seeing anything really. As it was the last night (and we were feeling lazy) we decided to order a pizza, and as it was about to be delivered my right hand rod was off! Luckily, it didn’t fight too hard and it was in the net and photo-ed, which turned out to be a nice 22lb 14oz mirror, before the pizza got cold- bonus!

That was the last of the carp action, but Will did manage an 18lb pike from the tiny ditch behind the lake! We had been seeing big swirls coming up, and eventually thought it was a pike, and using a few maggots to catch a roach he managed to catch it!

The only other bit of fishing I have done this month was a quick session on B-1 for a total carp feature. All my tactics will be in the magazine soon, but they really worked, catching 16 fish. I was mostly fishing 1 rod for about 7 hours in total!

Next month I’m not really sure what fishing I will do, but I do have my UK Carp Cup qualifier on Coking Farm Long Lake, so will definitely be practicing for that and hopefully will qualify!