With the close season is well and truly upon us and it was now time to start thinking about a spring stillwater campaign. I have spent the last four springs targeting big bream on a low stock Berkshire pit. The water contains around a dozen fish which can mean things can be a little slow at times. Having fished over 100 nights on this water, culminating in a personal best bream weighing 16lb 7oz, I felt it was time for a new challenge. After having a look around a few waters, fellow Gardner sponsored angler Sam Meeuwissen suggested a pit he was intending to fish. After securing a ticket at the beginning of April, I had a quick walk around the lake to familiarise myself with the venue. I always have my plumbing kit stashed away in the van and made good use of this by searching out some inviting areas. This would at least give me something to go on during my first visit to the venue.

I am glad I made the effort as in my second swim I located a small gravel bar only 30 yards from the bank. This was surrounded by heavy weed and just screamed an ideal area to lay down a carpet of bait. Once back at home I sorted out my kit for the following week, eager with anticipation. Arriving well after dark on Friday I was able to drop straight into the swim I fancied. Getting the rods and bait out was easy, as it was a simple case of finding the clear gravel area with the maker rod, clipping up and pacing the rods out down the bank to the desired distance. This would ensure everything landed bang on the money. 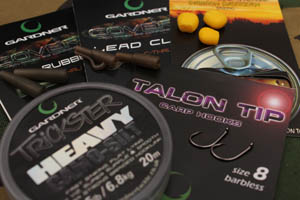 It was gone midnight before I finished spodding out a big bucket of groundbait full of hemp, pellets and corn, before I got the rods sorted. My rigs consisted of balanced sweetcorn hookbaits using the new Enterprise Tackle Super Soft Sweetcorn. This was perfectly balanced by the weight of a size 8 Talon Tip hook, my favourite pattern when using this rig. Hook length choice was my favourite Trickster braid and I added a small Micromesh PVA bag to each rig containing a pinch of 4mm pellets.

An hour later I started to get liners as the bream had obviously found the carpet of bait I had introduced only a short while ago. A take was imminent and it wasn’t long before I received a typical bream bite and landed a small fish of around 7lbs. A good start to the campaign, but I hoped a bigger fish might put in an appearance. That was the first of five bites that night, the best fish weighing just over 9lbs. Before dawn broke the swim went quiet and I had a feeling the fish had cleared the bait and move on.

The day passed quietly and mid-afternoon I introduced another big bucket of groundabit containing lots of molasses hoping that the flavour trail would attract the bream back into the area. Conditions deteriorated that night and the temperatures dropped to just above freezing. This certainly affected the fishing and only two fish fell to the rods that night, both small fish weighing around 7 to 8lbs. Before leaving I spent a couple of hours with the plumbing rod, learning the lake and trying to identify suitable areas for my next session. Much of the lake bed at short to medium range was full of weed, however, much further out in the middle section of the lake it seemed barren and it was here that I located a gravel bar running between two swims. 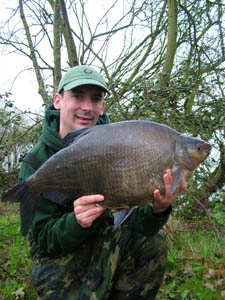 The following weekend I was back and was able to drop into the area I had located in my previous session. Lining up with a tree on the far bank I whacked the marker a long way out just past the area I had located. Drawing the lead back across the silt I soon felt the ‘tap tap’ as the lead bumped across the gravel. Popping the float up it was around 90-100 yards out, this feature just screamed bream. I decided to bait the swim aggressively and spent two hours spodding 12 litres of bait over the mark. I soon had three rods spread across the bar with Enterprise tackle Super Soft Corn hook baits with a small Micromesh PVA bag threaded down the hook length containing a small pinch of 4mm pellets. That night I took six bream from the area, the best weighing 11lb 9oz.

The following weekend I was back in the swim for another overnight session. After casting three rods out to the desired distance I started to get to work with the spod in a bid to lay down a carpet of feed across the bar. Two hours later, I’d had enough and it was time to sit back and await events. I had a take on each rod that night landing two bream to just under double figures and a rogue low double figure carp.

The weather conditions had been all over the place in April and we finally got the rain we so much needed. The nearby River Loddon found it difficult to contain the week of solid rain that fell and after bursting its banks it spilled into the lake leaving it, the nearby fields and roads completely under water. Hopefully in a couple of weeks the water levels will have subsided and I can get back to the lake for another bash.