My fishing this month started back on the syndicate, hoping for 1 last fish before the close season! I managed to get off uni early on the Monday, meaning I was going to be able to do 2 nights instead of my normal 1. After having a quick wander round, I dropped a bucket in a swim I had been told had past form and set about getting the rods out. 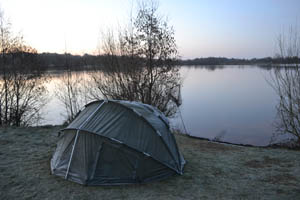 After a few casts with the marker I had found a nice little gravel seam at long range, and while clipping the rods up heard a fish jump twice near the spot! Full of confidence the rods went out well, and with a few spods of maggots and hemp over the top I sat back to wait. As night came in the temperature plummeted, and it looked less and less good for a bite, and in the morning I was greeted by a thick frost!

The weather soon started to warm up, and another fish crashed out near the spot. I decided to leave the rods out on the spot as they have gone out well and I didn’t want to risk disturbing the area. In the afternoon the weather changed from being seriously hot and with no wind, to a strong south-westerly blowing straight into my swim with a lot of rain as well! I was really confident now, but the fish didn’t seem to want to get their heads down and I guess the showing fish were just clearing their gills after being sat in the weed all winter.

I planned another 2 trips before the close, but it seemed every man and his dog decided they were going to do the last 5 nights of the season and therefore I couldn’t even get a swim so ended up at home doing more uni work! 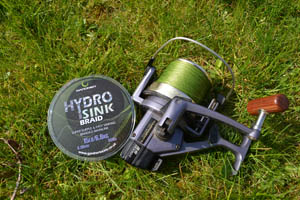 My next trip was to Linear Fisheries, hoping to get on Brasenose 1, with the intention of trying out braided mainline for the first time. With the reels spooled up with 15lb Hydro-Sink, and the car filled to the brim with bait I set off. When I arrived I couldn’t believe it, on a Tuesday there was only 1 swim left on all of B1 and B2! I went in it anyway, and having fished the swim in the BYCAC I knew the spots and soon had the rods out at about 3pm.

It didn’t take that long to get my first bite, a mid-double mirror. The benefits of the braid were clear from the start, the fish came straight out of the weed with a bit of pressure, and I could feel the perfect drop when the rod was recast!

One more mid double graced my net during the night, and then a 21lb mirror at first light, my first 20 of 2012! Both the rods were rigged up with a whittled down Kent Particles pop-up tipped with a fake maggot, and a size 8 Covert Incizor on around 5” of 15lb Chodskin. 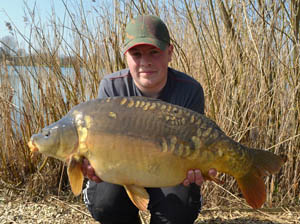 The lake really wasn’t fishing well, and I hadn’t seen anyone else catch! With some real hard work, spodding at over 130 yards accurately I managed to winkle out another 3 fish, amazingly all 20s at 21lb 4oz, 21lb 10oz and 22lb 8oz. It was at this point I felt my back “ping” and was in great pain, and it felt like a good time to pack up! 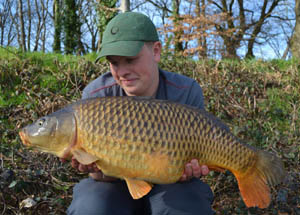 With the last week of the month being so hot, and not having to go to Uni, it would have been rude not to have done a bit of surface fishing! I always head to one of my local club lakes, called Sopley, at the start of the year for some surface fishing. The lake is filled with small commons, but with a bit of selective fishing you can single out the doubles. My target for this year however, was to catch a surface 20! After 3 short, 4 hour afternoon sessions, I had caught 23 fish. The biggest was a 19lb 2oz common, so I missed out on my target, but with all but 1 being doubles I couldn’t really complain, and there is still time yet! I had found success using a trimmed bit of cork on a size 12 Covert Mugga, and on this I only lost 1 fish!

I am starting to get the buzz back, and now have 3 weeks off uni with 2 nights on Horseshoe and 4 on CEMEX’s Sandhurst lake, hopefully I will catch a few lumps!