Skip to content
Home|Articles|Catch Reports, Mark Wosencroft Articles|A spring in my step and a whacker (or two) in my net… – by Mark Wozencroft

My ticket was just about to come to an end and I was keen to get to the lake for my last session for a while on there, so as you can imagine I was quite excited about getting the rods out and hopefully bagging myself a lump or two. 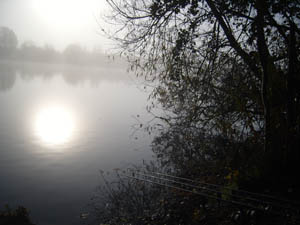 I rolled into the carp park full of anticipation and soon had the carp barrow loaded and was hastily making my way to the lake. The conditions were not the best to be honest with high pressure and bright sun forecast for the whole time I would be fishing there, but we all have to make the best out of the time we have allocated to us.

After a quick lap of the lake I realised that most of the going swims were taken, but I had an ace up my sleeve as I had been baiting up a not so popular swim just in case this happened to me. The mountain of gear was deposited in my chosen plot and I sat there exhausted – tired due the heat of the day. However, my spirits soon lifted sky high when I saw a carp crash out in front of me, so rubbing my hands together I was soon setting up camp.

I knew this particular swim well, and had previously given it a good going over with the marker float so it was not long before I had my rigs flying out to their designated spots. So the traps were set, all I had to do now was put the kettle on and everything would be perfect. 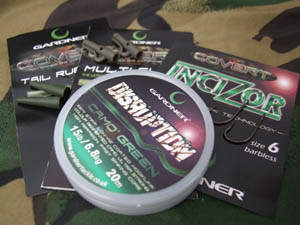 That night, at some ungodly hour I was rudely awoken by one of the most savage runs I had ever seen or heard. As I picked up the rod and was greeted by the satisfying curve that only a big carp can do, but whatever was attached to the Incizor it obviously had other ideas and duly tried to strip as much line as it could from my reel, the worrying thing was that I just could not stop it. Everything went solid as it had made the sanctuary of a weed bed but with a little persuasion I managed to get it moving, slowly at first but never the less moving, and I could feel the load getting lighter as the weed was coming off the line so the lead had been dumped by the Multi-Clip on the take, exactly as I had hoped. This was when it decided it wanted to make another demented dash for freedom but I soon curbed its enthusiasm and had it under control in no time. Soon it was plodding around in the deep margins, but Mr Carp had an ace up its sleeve – an unseen snag in the margins in front of me – and it found it with relative ease as well! It felt truly immovable once it had found the sanctuary of it, and try as I might I could not move it and so I put the rod back in the rest and opened the bail arm. 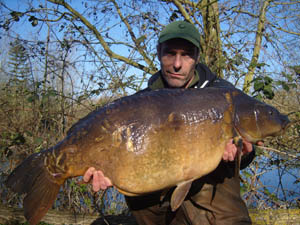 I sat there for a while scratching my head at what best to do in this situation. There was no way I was going to wade out there with almost 10 foot of water! Then it dawned on me that there was a boat on the lake that I could use to free it, so I donned my life jacket and went off to hunt for the boat. I eventually found it at the furthest point of the lake (just my luck) and had to try and get to the other end of the lake without getting lost along the way. More by luck than judgement I got back to my swim and put the landing net and unhooking mat in the boat, grabbed my rod and wound down to the fish which in turn dragged me towards it. No need for oars at the moment then!

I was now sat directly above my quarry and initially there was still no movement but then I could feel it kicking as it freed itself due to me applying pressure from a different angle, and so the fight carried on for a while but it was soon beaten, and with one last heave it was in the folds of my net. 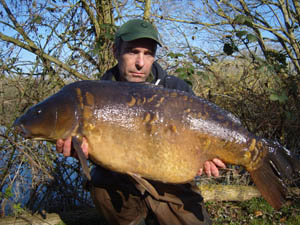 At this stage I still had no idea about the size of the fish and seeing as I was fairly close to the bank I decided not to haul it onto the boat, but to row back to shore and sort it out there. I bit through the line so all I had to do was get the mat out of the boat and lift my prize onto it. I soon realised that the carp was quite big and was not disappointed at the result and the scores on the doors did not let me down! At 35lb it was a worthy capture and the kind of result I was looking for.

Whilst I was fishing I noticed a small shoal of big roach swim past me and due to the clarity of the water I was able to see that these were of a specimen size. Being the opportunistic angler I quickly set up a rod to set my sights on these. I had some “sticky baits” bloodworm pellets which I was loose feeding to get them tempted and it wasn’t long before I had the reaction that I wanted and they were soon feeding with wild abandon. I flicked out my float with a small piece of bread flake and after a while I realised that they were not going to take it so I put my thinking cap on and the next piece of flake was dipped in a little edge I use if the going is tough, the ever faithful hydrolysed bloodworm compound. The dip did not let down on this occasion and neither did the new size 12 Talon Tip! As the bait slowly fell through the water one of the roach took it and I was soon playing a roach of specimen proportions. It was all a bit heart stopping at times, but the Roach was soon in the folds of my landing net and not long after that it was gracing my unhooking mat. 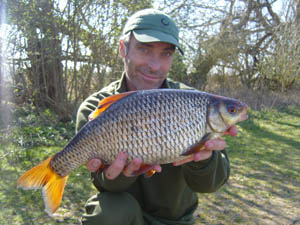 Just the sheer size of this fish took my breath away, and I knew straight away this was a new personal best roach and at 3lb 6oz’s it turned out to be just that! So with a big smile I was soon having the pictures with my prize. 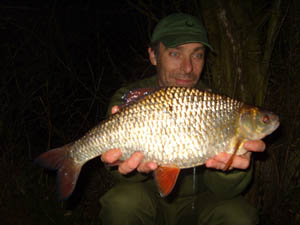 Just when I thought life couldn’t get any better having caught a fish of that size I was to be surprised later that evening when away slid my float again and I was soon playing a sizable roach in the fading light. When I laid this one on the mat I was astonished to realise that this one was probably going to beat my personal best for a second time in a day, and was soon punching the air in joy as the monster roach weighed in at 3lb 12oz!