It has been an early start to our competition season this year with our first match being the Charity-Carping pairs match qualifier. The match took place over the last weekend in February and was held at the Willows Lakes complex on the notorious Match Lake.

We arrived at the venue on the Thursday night so we could have a look at the pegging and try to put our swim choice in some sort of order. We had only ever seen the venue once, the previous weekend, when we visited to have a scout about and speak to some of the local match anglers. Knowledge gained on that trip was to stand us in good shape for the coming match as we had picked up some vital information on fish movements and tactics.
We put our swims in order and chilled out preparing rigs etc ready for the off in the morning. The draw took place around 9.30am and we came out 9th out of 12 pairs. Fortunately for us our top choice swim was still available so without hesitation swim 1 was called out and we were making our way around to set up. From the moment we arrived at our swim it was evident that the fish were stacked up, so we set up everything and sat back quiet making mental notes of where they were showing. 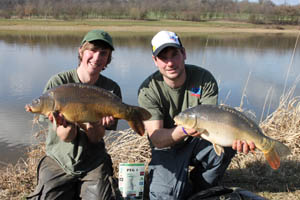 The first whistle went to marker and spod/bait up but we did nothing apart from set the boundary with next door. Every other pair on the lake was thrashing the water to a foam and filling it in with bait so by sitting quiet the fish became even more confident in our swim as they thought there was no pressure. We had also scaled our tackle right down as the fish on average were between 2-12lb so 8lb Gardner Hydro Flo was used as mainline and light 1oz leads kept disturbance to a minimum.

When the next hooter sounded, to signal the start of the match, we flicked out the rods in the areas we had seen fish showing and within seconds we had 2 fish on and had taken an early lead. We used CC Moore ‘Mini Bitez’ on short 6lb Gardner Hydro Flo hooklinks coupled with a size 10 Covert Mugga. These were fished in conjunction with small micro mesh PVA bags filled with a mixture of CC Moore pellets and then dipped in the devastating Feedstim XP.

We continued to catch well and by the time the first weigh in came around we had taken a firm lead. By keeping everything quiet and slack the fish were confident in our swim and continued to feed. Saturday morning was soon upon us and turned out to be a cracking day so we tried some short 2ft zigs with Gardner Zig Rig Foam of varying colours that was dipped in Feedstim XP then dusted in the CC Moore bait dusting catalyst to give extra pulling power. This worked great and we continued to regularly catch throughout the day. By 8pm on Saturday we were on 128.05lb and second place was 32.04lb with many other pairs still to put a fish on the score sheet. 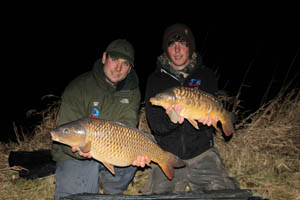 We continued fishing hard throughout the night and Sunday morning. The fish seemed to be getting easier and easier to catch and it was evident that they were loving the Mini Bitez! The hooter sounded at 12pm and it was time to weigh in for the final time, and as it happens that final weigh in was our best of the competition at 56.07lb! The weights were added up and our final total was 216.03lb. We were extremely pleased with that weight as second place finished on 60.15lb and third was 38.06lb. Everyone congratulated us and we were awarded with trophy’s, and in to the final in August. For us it is a great start to a busy competition year and means we have won three different events in the last 12 months. 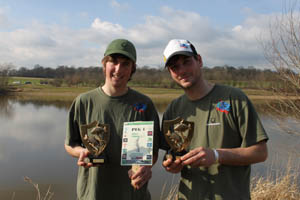 A big thanks to Gardner Tackle and CC Moore for their continued support without the amazing products we may not have had such good results. Our next match is the BCAC qualifier on the same lake so fingers crossed we do just as well. Until next time best fishes! 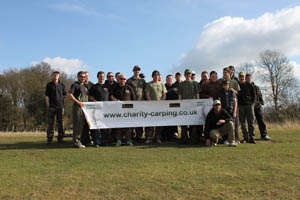