I started off this month having a quick day session, practicing on the venue that I am doing the UK Carp Cup on later this year, the Long Lake at Coking Farm in Dorset.  The lake is about 4 acres in size, rammed with carp averaging around 7lb with a few doubles, going up to just over 20lb. I arrived at the lake to find it empty, so had a quick walk round to try and spot any activity. It didn’t take long as in the first swim fish were evident crashing and fizzing on the island margins. 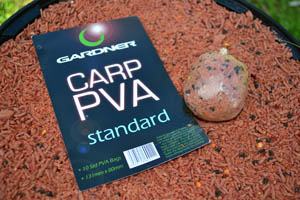 I grabbed the rods and tackled them up with small Gardner Solid PVA bags filled with boilie crumb and 3mm Kent Particles Pellet and a bright Kent Particles pop up on the hair. I gently cast them into the area the fish had been seen, slackened the Hydrotuff right off and waited to start hauling. The fish didn’t want to play ball though and after 15 minutes of nothing they started showing 5 swims up, so I quickly moved and recast the rods as before.  Again the activity died instantly and then 15 minutes later the fish started showing a few swims up. Very weird, and very spooky fish considering how difficult the lake is normally! I decided I was going to move again, as this time they were more in open water, so if they spooked they may come back later in the day. 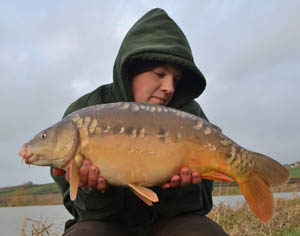 My theory was proved right as after about 2 hours of nothing showing on the lake, my middle rod whipped tight and I was into my first fish of the year.  The fish put up a very good fight before slipping into the net, a pristine linear of around 7lb. I did a few photos on the mat before slipping it back, and re-bagged the rod.  I didn’t cast straight away though, thinking it may spook any other fish in the area.  It seemed like this was the right decision as within minutes my other rod was away!  The fish was another pristine mirror of just under double figures, so I took a couple of quick (bad!) self takes.  With no rods in the water I had to recast, but knew it would be the kiss of death. Soon after, big storm clouds started to roll in so I quickly threw all the gear in the car and headed for home after learning quite a lot, which was good! 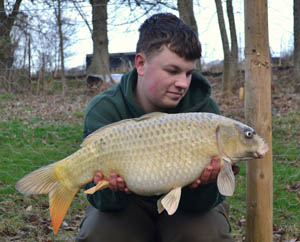 The next week I started work experience at For Life Experience, based at the FLE fishery at Greenridge Farm in Ampfield, Romsey.  After being worked hard during the week I really had the buzz to go fishing the first weekend, so dad and I went for a day session at The Top Lake at the FLE fishery. We set up where a lot of fish had been coming out lately, and using the same tactics as we had used at Coking we caught over 20 fish between us. The biggest being a Ghostie common of 11lb (now named “The Godfather”!). Some of the fish were moved to the on-site stock pond which we had been feeding heavily in attempt to get some bigger fish for the future which will be good to watch!

Since then I have really lost the “buzz” to go fishing, and I haven’t got the rods out for a few weeks. I did go to the Brentwood show though, which was a good laugh meeting up with people, but still did nothing to make me want to get out on the bank. I’m sure there will be some fish to report next month however, but maybe not all of the carpy variety!