The weather at the start and middle of January has been exceptionally mild and when we look back to this time last year it couldn’t have been anymore different. This month has again seen me targeting different species and I started by trying to bag a few carp from a local water fishing short evening sessions after work. When the weather begins to chill the fish tend to gather in the middle of the pond. This year was no different and it was simply a matter of pin-pointing the fish in the middle of the lake and I was confident the action would start. I knew from past experience fishing single bright pop ups on a multi rig using a long length of 15lb Chod Skin to ensured a good presentation over the very silty bottom.  Fishing four short sessions I soon had the fish pinned down and I managed a dozen fish, the best a common just short of 20lb. I soon had the mark lined up from both banks in case one of the swims was taken. 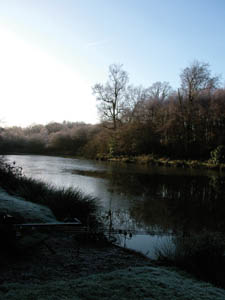 I decided on a rare Saturday off from big fish angling and decided on some fun fishing which I hoped would make a nice change. I teamed up with keen young carpers Adam Maltby and Bradley Whiten, both 14 years of age. Adam has caught a shed load of good fish in recent times and from speaking to his dad I knew how keen he was to bag his first 20lb carp. I arrived at the lake early Saturday morning and secured a swim that covers the main body of open water. The rods were ready to go from the previous evening and it only took a few minutes before they were sailing out to zone. I knew it wouldn’t be long before they arrived and it was only a few minutes before a car pulled into car park.  Before they could make it round the right hand rod was away with a typical low double figure common. 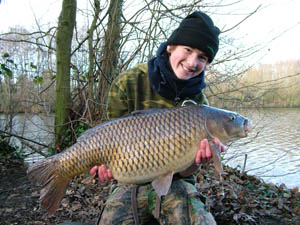 Today was about the kids and they soon had their rods sorted and ready to go. Pointing to the ‘hot’ area they soon had their baits positioned on the money and it was just a case of sitting back and waiting for the action. The day unfolded well and after a slow start the boys managed 14 fish, mostly doubles including two cracking fully-scaled mirrors to young Bradley. Adam stole the show and in the early afternoon he had a steady take and after a great fight landed his first twenty pound carp weighing 20lb 11oz. Good angling from both of them and it was made even better by the fact that Adams dad, Paul Maltby spent the day blanking off the swim next door!

Next on the hit list was a big perch. I headed off with Rory Kingerley into deepest darkest Sussex in search of amonster. We had a great day and after I missed a positive bite early afternoon where the hook turned into the bait. Rory faired a lot better and landed two cracking fish weighing 2lb 12oz and 3lb 1oz. 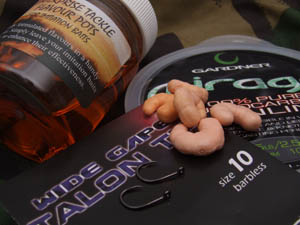 The following weekend I decided to have another go and after some cold weather during the week I arrived to find the lake 2/3 thirds frozen.  After making the two hour drive I decided to fish one of the two swims that were free of ice. I rigged up three rods with a 1oz running leads, 6lb Hydro Flo mainline, 14 inches of 5.5lb Mirage fluorocarbon as a hook length and a size 10 barbless Wide Gape Talon Tip hook. Live baits would have been my preferred option but I couldn’t catch any so I rigged up with prawns on each rod that had been left to soak in Enterprise Worm and Shrimp flavour. 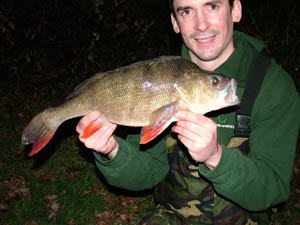 Unsurprisingly I didn’t have any action all day and then on dusk I received two bites in quick succession. The first fish weighed around 10oz but gave me hope of more action to follow. A couple of minutes later I received a slow steady bite and on picking up the rod I knew straight away I had hooked a bigger fish. After a slow but steady fight the perch stayed deep all the way in and I was relieved when the fish went into the net.  The fish weighed half an ounce under 4lbs and made the 200 mile round trip very worthwhile!