What a month December has been and compared with last year the weather couldn’t have been anymore different. The mild weather and lack of frosts has meant the fish have stayed active and feeding.  Luckily I have managed a bit of time on the bank this month, but not as much as I would have liked. I have tried to keep things varied like normal and in December I have spent most of my time chasing big chub and perch. 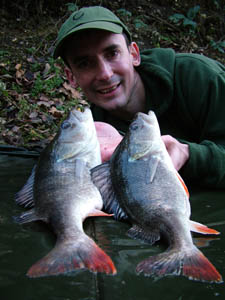 My first few sessions of the month were spent on a small commercial in Aldermaston targeting the venues impressive perch population using match tactics.  Using fine lines and small hooks I chose to abandon rod and line and use a pole, a very underrated tactic by the specimen angler. This would allow me to both present my hookbait and feed with deadly accuracy, tight to the marginal bushes where I knew the perch would be hiding.  Regularly feeding finely chopped worm, red maggots and crushed casters via a bait dropper kept the fish coming and over the course of the session I landed around twenty good sized perch, the best two weighing 1lb 15oz and 2lb 2oz.

After another session chasing ‘stripeys’ I checked the long range weather forecast which predicted favourable weather for a spot of river fishing over the Christmas period. I dearly wanted to catch another big chub and after waiting for the weather to come good I pre-baited several swims on my local River Kennet with a mixture of hemp, 4mm trout pellets and dead maggots for two days before deciding to fish. The stretch contained a low stock of big fish and I hoped the pre-baiting whilst letting the swims rest would concentrate the fish ready for my arrival. 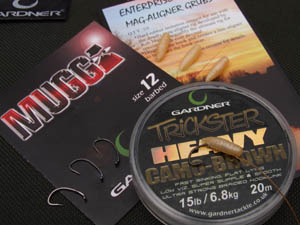 Arriving at the river late Christmas day evening I quickly tackled up two rods fishing mag-aligner style – a deadly method for big chub.  Threading an Enterprise Tackle mag-aligner grub down the hook shank creates a line-aligner effect which causes the hook to flip and turn in the fish’s mouth creating a very effective hooking mechanism  A soft braided hook length is always beneficial when using this rig and I am sold on Trickster Heavy in 15lb breaking strain. Whilst field testing this product I managed several big Barbel and a hefty 8lb 5oz chub from the River Loddon proving its worth as a top hook length material. A 3oz flat pear lead nestling against a Covert Buffer Bead completed the set up with a Q Ring adding more flexibility to the rig. Two white maggots were nicked onto a size 12 Mugga hook before the whole lot was folded in a large Micromesh PVA bag containing around half a pint of maggots. 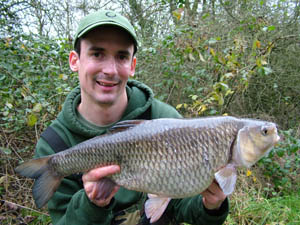 After casting a good fish rolled downstream and after a succession of good line bites the upstream rod pulled over and after a typical big chub fight I was soon netting my prize.  At first I didn’t think it was a particularly big fish until placing it on the mat when I saw how deep it was! I knew it would be pushing 7lbs and on the scales and this was confirmed with a weight of 7lb 6oz.

The next evening I decided to drop on to my local River Loddon. Using the same tactics the first night produced a 5lb 12oz chub and a December barbel of around 6lbs in weight.  The following evening saw the water temperature plummet and after a bite-less night I decided enough was enough and called it a day.