This month I started my mini winter campaign on the Top Lake at Longleat. The lake is a 6 or 7 acre estate lake set in the grounds of the Longleat estate holding a good head of decent size fish, with the biggest being “Shadow”, a 30lb common I’d dearly love to catch! 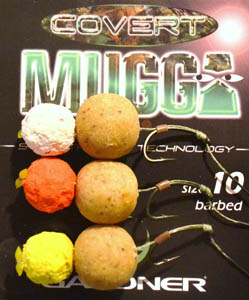 My first session the lake I decided to go against the grain a bit, fishing with large amounts of 16 and 18 mm Cell boilies instead of the small one-bite tactics used by most of the anglers fishing there.

Dad was going to join me on this session, the first time he has been fishing in a long time so hopefully he could catch a fish or 10!  We got there as the gates opened at 7am and found the lake to be completely empty; it was so weird that we thought the lake was closed for some reason.

We set up anyway, in the deepest area of the lake and soon had the rods out. The rig was kept simple, comprising of around 10” of 15lb Chod Skin, a size 10 Covert Mugga and a small piece of silicone on the bend.  The bait was a 16mm Cell rolled by Kent Particles, tipped with a trimmed down Sweet Cream pop up or Hawaiian Pineapple. It only took 5 minutes before I had my first run, a nice koi of 17lb, quickly followed by a 23lb 10oz mirror! 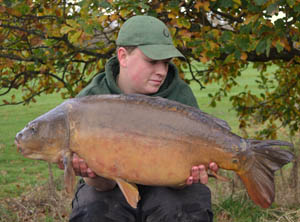 The action came thick and fast often having a fish before I could replace the rod that had just gone! I ended up with 17 fish to 26lb 2oz and dad had 1! I was well pleased with the result while others around me struggled, and planned a return on Tuesday night.

I couldn’t believe it when the lake was empty again on Tuesday morning so I was straight back into the same swim, with the rods still set up and marked I was soon fishing again.

Almost instantly the bites started up again, with alot of the fish being over 20lb so I was very happy! The highlight was 2 of the rods screaming off at the same time, resulting in a 25lb 4oz and a 28lb in the net at the same time, some of the biggest fish in the lake! I amazingly actually managed to catch the 28 again the next morning in a double take with a 23! 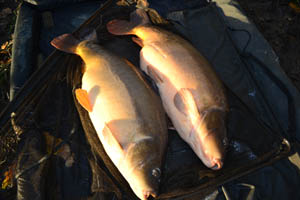 My final total for the 2 sessions was 40 fish including 19 20’s to 28lb and 4 over 25lb! I was really happy with my result, especially for December but couldn’t help feel I was close to “Shadow”, I just needed to get back to the lake before it closed for the winter! 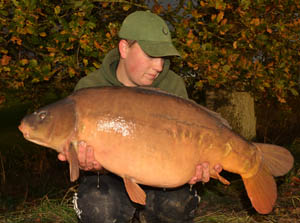 I managed to get back to the lake the next week for another 24 hour session. My mate Rob had been in the swim for a night before me having caught quite a few, but overnight a huge amount of rain had fallen and the lake went from being gin clear to the colour of weak tea.

I set up and got the rods back on the spots as it got dark, hopeful of action but a bit wary that the lake may have changed in my absence. The right hand rod was away just before first light, and after a good fight a typical upper double mirror was in the net. It was absolutely freezing so I quickly unhooked it and slipped it back. I quickly chucked the rod back out and got in the bag with my hot water bottle!

I was up at first light, but my swim looked lifeless and I could see some fizzing in the middle of the lake. I had seen this most mornings, so tied a few rigs and had a rebait and recast. I was well overdue a bite by now and I started to get a bit worried. I had a quick wander up the lake, and the water did seem a bit more active, but I stayed put thinking the fish had been here so much I should catch a few! Shortly after the heavens opened, with snow! An awesome sight, but a bit cold and my hopes of catching kept dwindling.

Another hour passed before I couldn’t take it anymore and quickly packed away and moved to the middle. With 3 rods out on stringers, and an hour to go until I needed to pack up the middle rod signalled a fast take about half an hour after being cast out. After a typically powerful fight a mirror of 20lb 8oz was soon in the net! I slipped it back in the net while I sorted the rod and the camera, but it somehow managed to get out! It was my 20th 20 of December, a milestone I was very proud of, and a testament to the lake! 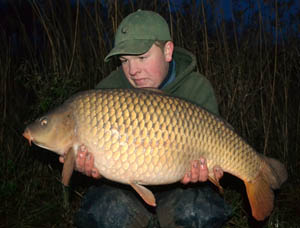 The rod was away again almost instantly with a 20lb 4oz common on the end, but before I could get the fish out onto the mat the right hand rod was away with a 22lb common! I had to pack up soon after this, happy with my results, but a bit disappointed that I hadn’t caught “Shadow” and with the lake closing that week I had missed out for this year!

The only other bit of fishing I managed this month was whilst away on holiday with my family at Centre Parcs, fishing in the onsite lake. The lake is filled with very small carp, and within the space of a few hours dad and I managed over 50 fish, the biggest being a generous 3lb!

Great fun on light tackle, and a nice way to spend a day! I should be doing a bit more fishing in January, hoping to bag a whacker to welcome in the New Year, and will be doing work experience with For Life Experiences at Greenridge Farm with fellow Gardner team members Graham Mabey and Tom Oliver!