This month I have been swamped with college work so time on the bank has been a bit limited.  However, taking the time to do the assignments at home with proper research meant I got good grades, so I should have more time on the bank next month!

My first trip this month was a Friday night visit to the syndicate lake. I drove down straight from college to find the lake very quiet for the time of year, with only 4 or 5 anglers on.  After a quick walk around I settled on a swim fishing to the edge of a very big weedbed in the south-westerly corner of the lake. This area had been productive lately, probably down the weed holding a lot of naturals and warmth, but with the pressure easing a bit I thought the fish might have a feed in the area again.

I still had the solid bag set up detailed last month in my bag so I attached them to the rods, but used a Kent Particles tiger nut on the hook and crushed some tigers into the bag mix.  I cast these to the edge of the weedbed and settled back to wait.  My dad came down in the evening with some fish and chips, and it was nice to have a chat and eat some proper food on the bank as well!
Nothing happened in the night, but Neil who was fishing the swim next door wandered down and said the immortal words “I’ve got a hippo in the net”.

The fish turned out to be “The Sean English fish” (which has only been out 4 or 5 times in the last 12 years!), a new PB for Neil at 51lb 4oz! Seeing that fish was definitely a privilege and motivator to carry on through the colder weather and long nights of winter. 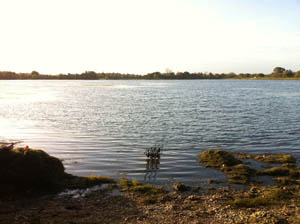 I packed away shortly after Neil had put the fish back. Whilst everything was being folded away I saw a fish roll in a weedbed at long range and to the right a bit.  I was back at the lake the next Tuesday as a netting planned at college was cancelled so everything was quickly slung into the car and I headed off down to the lake.

Well, I managed a new PB in the shape of one of the lakes A-team at a weight of 49lb 8oz! The full story is in an article called “Autumn Magic” that should be on the site at the moment! 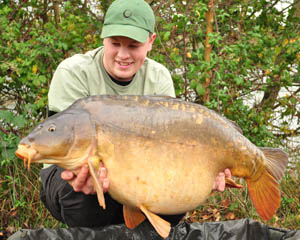 I tried to get back the weekend after, but turning up at the lake to find 16 anglers on really put me off, and I ended up turning round and going home which was a bit annoying!

I did manage another couple of nights back on the lake, but the only action being the first few frosts of the year killing the weed and causing it to drift about.  This meant fishing with ultra slack, well sunk lines so that the weed didn’t constantly build up ion it d. With the line down where it needed to be it meant it needed to be abrasion resistant line too so I spooled up with this I some Gardner HyrdoTUFF as I could still hit the ranges, but rely on it 100% to never let me down! 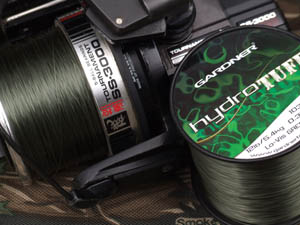 My last session of the month was a short day session with a mate from Sparsholt college on the college lake.  I set up using very basic rigs made up with of 15lb Disruption and a size 10 Covert Mugga hooks, and baited lightly with 16mm Mainline Cell rolled by Kent Particles, fishing a matching bottom bait over the top.

The tactics paid off and I landed 11 fish, and Andy caught 5 (I made sure he won’t forget that!!).  None of the fish were big, the biggest probably just over double figures, but they were all stunning and in brilliant condition! 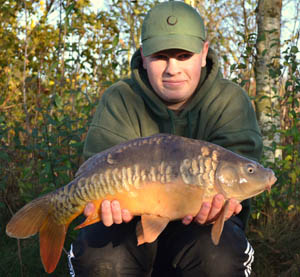 Next month I will be concentrating on the top lake at Longleat as I start my winter campaign for the 30lb common in there, and the many 20’s that the lake also offers!