This year I have been concentrating on a low stock, 55 acre gravel pit near where I live.  I had some success during the summer and early autumn culminating in 3 fish, including a new PB leather of 45lb, and 3 fish lost as well.

All year it was the autumn I was really looking forward to, when, from what I had been told, the fish threw caution to the wind and couldn’t get enough boilie – which suits my angling style perfectly!  However, it never seemed to work out like that, with the fish held up in the huge weedbeds on the end of the wind stuffing themselves on the abundance of naturals, and I suffered 17 blank nights in a row which really started to dent my confidence.

I turned up in the early afternoon of Tuesday 8th November for another quick overnighter, and managed to secure a swim that fished towards the weediest area of the lake on the end of a warm south-westerly wind.  The weather was still unseasonably warm and a 51 pound mirror had been out from the area at the weekend so I was really confident!

After a few casts with a bare lead I found an area of light weed, perfect for the long running chod rig I like to use, incorporating 6ft of Camo Plummet leadcore, an XL Covert Buffer Bead and a 4” chod section made with 20lb Tripwire with a size 4 Covert Chod Hook. 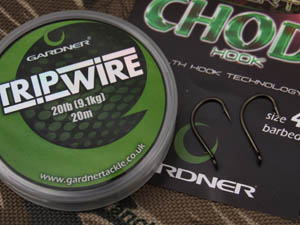 I had been using a shellfish bait over recent months, but with the water temperatures dropping and the recent lack of action I decided that a change was needed.  This time I was going to use Cell rolled by Kent particles in a mixture of 16mm and 18mm with some spicy hemp and the new Kent Particles ‘Cell boilie crumb’.

I mixed up about a kilo of this and spodded it out to the area and positioned all 3 rods just on dark; 2 with Cell 18mm corkball pop-ups and 1 on the faithful Hawaiian Pineapple.  I decided to fish my 15lb HyrdoTuff nice and slack so it hugged the bottom, avoiding the drifting weed and hopefully not spooking the fish from the swim which had been heavily pressured lately. 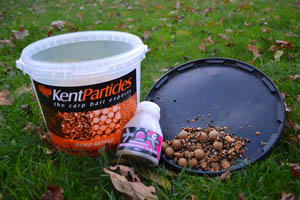 With the rods out on the spot, I slung the brolly up as the drizzle came in, but soon found out my brolly was about as much use a colander!  Trying to ignore the water dripping onto my bed and gear I got the kettle on and thought about how carpy it was looking, but soon ended up playing on my phone and making endless cups of tea as you do on long winter nights!  It didn’t seem long before I was tucked up in my slightly wet sleeping bag trying to get some sleep!

I had set the alarm for before first light so that I could see if any fish showed, and as the sun slowly fought its way into the sky a fish showed a long, long way out into the middle of the lake.  This was encouraging as nothing had been seen for a while, but also this is where the fish tend to move to for the winter. 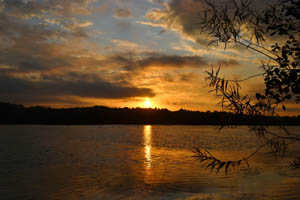 The morning slowly passed by and I went into the swim next door to have a chat with the experienced bailiff, Steve, who was fishing in there.  We were talking about all things carpy and the history of the lake when I got a few beeps on my alarm.  I could see that my spot was covered in coots, so assuming it was a bird I went back to my swim expecting to see the line tight and a coot flapping about!  It was my middle rod, and I lifted into a few taps and all the coots taking off followed by a big boil on the surface!  I started to pump what I thought might have been a tench or bream with a load of weed round its head back towards me.  Steve was stood next to me and also thought it was probably a bream as there was no fight at all.  I kept pumping whatever was on the end quite easily back towards the net and about 20 yards out a huge weedball hit the surface, with no sign of a fish in it.  Steve offered to net it anyway, and it was a good thing he did as about 5 yards out a huge tail appeared out the side!  Steve expertly slid the net under fish and weed and lifted the cord.  I was really happy as I just wanted 1 more fish for the year, and now I had it.  I jumped in the water and started to pull the weed off to see what fish it was.  The fish was sat upright and I soon saw a little row of scales on its right flank, a fish that had been out at 43lb+ in the summer, and one everyone thought would be touching 50!  We quickly secured the net, and I called my mum to come and help with the photos.  The mat was all sorted, and I couldn’t help constantly looking the fish and thinking “HOW WIDE IS THAT!”. 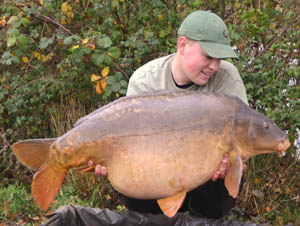 Mum soon arrived and I lifted the fish onto the mat.  It was perfectly nailed in the bottom lip and the fish looked pristine, but already had a few leeches around its pecs and belly- indicating it had been sat in the weed just eating the huge amount of naturals!  We then slid it into the sling and onto the scales, with the dial facing Steve.  “What’s your PB Calum?”  he asked, “47lb 6oz, why?”, “try 49lb 8oz!”. I couldn’t believe it and had to look at the dial myself.  Next were the photos, which went really quickly with the fish behaving brilliantly, so I tried for a few returner shots. It was then that the fish decided it didn’t like having its photo taken and tail walked out of the sling back into the lake, giving me a soaking in the process!  I just stood in the lake and watched it swim off not quite believing it still.  All that was left to do now was let all my mates know, pack up, go home and get on the with college work I should have been doing!