My first trip out this month was a weekend session back on the syndicate, just as the heat wave was coming to an end.  Having managed to get back into peg 18 (which controls the weedy section of the “Big Bay” and is also where an awful lot of the fish were) I positioned the rods in familiar spots having fished this swim for most of the summer.  camp was set up well back from the water’s edge to minimise bank side disturbance  and I did away with the bivvy due to the lovely weather.

I hoped my bite alarm would scream,  however the fish seemed more interested in a last minute chance to sunbathe rather than having a munch, so in seemingly no time I was packing up and barrowing down the familiar track again.

Having recently got a DSLR camera I couldn’t resist trying to get some pictures of the fish sat in the weed. Luckily I got quite a few pictures which was a bonus, and gave me something to remind me why I bother next time I’m sat behind motionless rods, but the best thing of all was when I actually managed  to find and watch my target fish, the elusive “Single Scale” at 50lb plus! 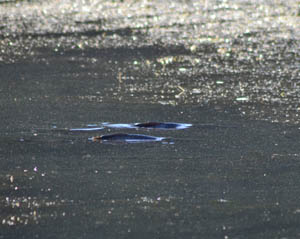 My next session was a social on Brasenose 2 with some friends from the BYCAC.  Even though it was very cold, plenty of fish were caught and the social was thoroughly enjoyed!

The very next weekend I was at Broadlands, practicing for the BCAC qualifier with my partner for the match, Ryan Dyke.  After a quick walk round the lake to familiarise ourselves with the venue we started setting up in our chosen swims in the middle of the 2 islands  – with me on the right fishing the open water and to the small island, and Ryan on the left fishing to the end of the big island.

Ryan soon had his rods sorted, but I was finding it a bit hard seeing as I’m so used to casting as far as I can, not tucking it under a snaggy bush on an island! I won’t say how many times I landed rigs in the trees, however once the rods were out it didn’t take long for the right hander tight to the small island to rattle off, resulting in a lovely little pinkish mirror.

Ryan’s rod was also away while I played my fish, but his turned out to be a pike, and was soon followed by another – they certainly seemed to like their white pop ups!
It seemed the right hand rod was on the spot and a further 2 fish graced my net in a short space of time, both welcome low double commons.

As darkness fell, the temperature plummeted and the action seemed to dry up, but finally at about 3am my left hand rod signalled a bite and I was dragged from my nice warm sleeping bag to shiver whilst playing my biggest of the session.  A pristine common at just over 17lb.

All the fish on this session fell to Kent Particles ‘Hawaiian Pineapple’ pop ups, mounted on a size 8 Gardner Covert Wide Gape Talon Tip on a 4” length of completely stripped 15lb Gardner Disruption.  Along with a 3oz inline lead, this was al neatly packed inside a ‘standard’ size Gardner PVA bag.  The mixture I used Inside the solid bags was a combination of 2mm Halibut pellets and a little Kent Particles Shellfish B5 boilie crumb. 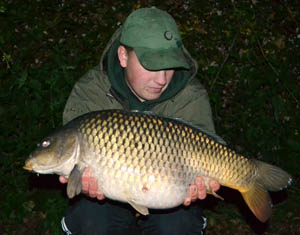 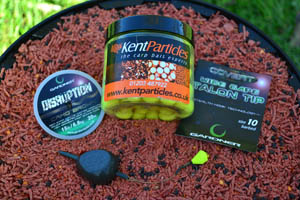 We had planned to stay on for 48 hours, but I woke up to the sound of the “angler” opposite blaring his radio full volume, and then sailing his bait boat to well over halfway and directly onto the spot he had seen me catch from, funny that!  This and the fact the lake got much busier over the next hour, meant that we decided to pack up sooner than planned and return at a later, hopefully quieter, date!
I was back to Sparsholt the week after, but the week after was “reading break” or “fishing break” as I preferred to call it!

First, I planned to do a few more nights on the syndicate as a low pressure front was coming in along with a new strong South Westerly wind.  However I turned up to find the windward area of the lake completely unfishable due to 3 huge drifting weed beds collecting there.  Instead I set up as close as I could and cast out my faithful set up detailed last month, and over the next 48 hours moved a couple of times but never felt confident, and packed up fishless, again!

The next day I was packing my gear ready for a social with Benedict Fowler on Brasenose 2, in hope of getting a bend in the rod.  The session was hard, with the temperatures plummeting at night (not helped by me breaking my bivvy, again!) and an almost constant biting wind!

I did manage to winkle out 7 fish and lose 1, all on my tried and trusted maggot rig, all of them being upper doubles including some very nice scaly ones.  Benedict also managed a few, topped by his new personal best ,and a new 30 for Brasenose 2, at 31lb 6oz! 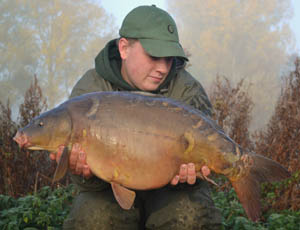 The day after getting back from Linear I was back out on the bank, but this time I was coaching with my local club and Avon Valley Extended Services, who jointly  run courses in the school holidays teaching local young people how to fish.  It was a very rewarding day, and I enjoyed watching their floats dip under and another roach swung in much to their delight!  I couldn’t help but put out a couple of rods for a bigger fish, 1 tench was obliging and was expertly landed by my lads, Adam and Sam, and held up for a photo.  It’s great to give something back to the sport I love so much, and really made my day seeing their faces with every fish!

I did manage a quick night back on the syndicate after that, and after clearing about 10 tonnes of weed from the margins of the swim on the end of the wind it was fishable again, but sadly only one liner was the reward for my effort!

Hopefully I’ll be able to bag another fish from the lake before the cold weather really sets in, but otherwise it’s an awesome time of year to be on the bank!