After catching a big perch last month I was a little lost on what to target next. I had planned to visit the venue most of the winter and with the long drive back and forth I was expecting a long haul. It was great to get this fish off the ‘hit list’ and there would be no more perch fishing this winter that was for sure! I had a week to ten days with no fishing as I tried to formulate a plan and over this time I visited a number of venues in search of some inspiration.

During this time and speaking to several friends the River Kennet came up in conversation and it would be nice to have a change from the more familiar River Loddon which I normally target. The section I wanted to fish was on a club ticket and after friend Andy Loble sorted a guest ticket we were on our way. 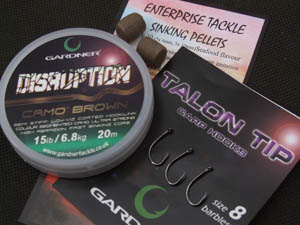 Walking the venue I was surprised how intimate it was and this small section was rumoured to contain a couple of fish that were certainly worth targeting. I settled in to a swim with a large snag tree downstream which screamed barbel.  I applied ten large bait droppers of freshly cooked hemp a short distance from the tree hoping to draw the fish from the cover.  Knowing a big fish could be in the area I took no chances and tackled with 12lb Hydro Tuff mainline, 3 feet of Plummet Leadcore which having the added bonus of keeping the line around the rig pinned deck but also has extra abrasion resistance if a fish did make the cover. A 2oz running Grappler lead completed the set up with a 15lb brown Disruption hook length.  A strong size 8 Talon Tip was tied to the business end and a 10mm Enterprise Imitation sinking pellet was the chosen hook bait.

It took several casts to get the rigs spot on and after the disturbance I decided to leave them put until I either got a bite or it was time to go home. Four hours after casting the downstream rod wrapped round and a barbel was hooked. Guiding the fish away from the snaggy tree my first Kennet barbel in recent years was being led over the waiting net. Two hours later and the upstream rod repeated the process and a better fish was hooked.  After a good fight with the fish heading upstream a Kennet double weighing 10lb 2oz was being held for the camera. A small chub around 3lbs ended what was an enjoyable session and it was soon time to head home. 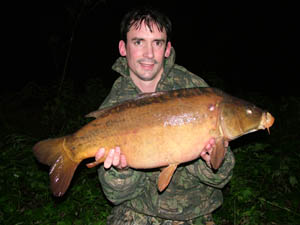 The very next day I filled in the application and sent it off to club who controlled the venue hoping they had a ticket available. Luck was obviously on my side as a ticket was received in the post three days late.  Friday evening saw me heading off to the river and I was soon settled in the same swim as the week before. Following the same procedure as last time I received a vicious bite four hours after casting.  From the first instance I knew I was connected to a good fish and after an excellent fight I was netting what I thought was going to be a very big barbel. After shining my head touch in the bottom of the net I was greeted by the sight of a carp. Weighing 15lb 4oz it was a nice surprise and a small chub followed a few hours later before it was time to head for home.

I was back at the river the next day and I decided to head for a different area of the stretch which contained deeper water hoping that this might be where the bigger fish were hiding. Moulding a handful of 6mm scalded pellets around the lead I flicked it into the pool and sat back to wait. At 10pm I had a vicious bite and after picking up the rod the fish powered off only for the hook to pull a few seconds after. I was gutted that I had obviously lost a good fish and I re-positioned the rod but unfortunately no further bites were forth coming. 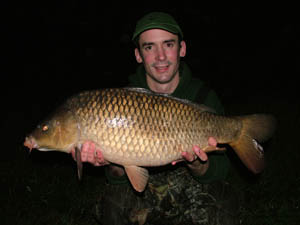 The following evening I was back, keen to settle the score. I decided to settle in the deeper water again as I had a hunch this is where the bigger fish were spending most of their time. At 2am I received a positive bite from the same area and after an explosive fight a big fish was soon being slid over the waiting net. Shining my head torch into the mesh I was looking down at another carp, this time a common weighing 14lb 2oz.  A quick overnight session on Tuesday night produced two further fish a small common of around 7lb and a bream just as I was packaging up of around 5lb.

Over the next month weather depending I aim to keep returning to the river during any mild spells in the hope of tracking down one of the rivers big barbel. They can’t hide away for ever…