After a successful end to the last river season, that culminated in the capture of my personal best Barbel of 16.12lb, I have once again been out and about having a go for the larger fish that live in the river – sadly to no avail yet, but all in good time.

As I had been fishing the same stretch of the River Kennet for a while I have built up a good knowledge of where all the deep holes, snags, gravel runs and other features are located, which was perfect to begin how to start a bit of a campaign. It had been a while since I had an opportunity to return to one of my favourite stretches; a bit of river I really enjoy visiting and where I really feel confident whilst fishing.

My plan of attack was to do some quick over night sessions in between finishing work and then starting again in the morning. Each visit being a maximum of 12 hours fishing. I had previously found that pre-baiting really worked in the long run, so I began a short baiting campaign 2 weeks before I intended wetting a line. The idea simply being to get the fish feeding really confidently on the free baits I would be using during my fishing sessions.

I visited the intended swim; that had an overhanging tree on the inside bend with a deep hole underneath it to my left, with a nice steady run directly in front of the swim. Three times each week I delivering 1kg of CC Moores Odyssey XXX over 2 spots in the swim, as well as 2kg of mixed sized halibut pellet soaked in CC Moores Red Venom and Halibut Oil. This was all introduced using a large bait dropper to ensure the bait got down to the river bed and was concentrated around the areas I was hoping to get the Barbel feeding.

On the second week of visiting the river I started to see fish moving over the pre-baited area (BONUS!). Amongst these fish were a number of stretches larger Barbel, one of which looked to be my target fish which would hopefully push the scales over the 17lb mark – maybe even 18lb! To say I was excited was an under statement, it was one of those moments when you truly wished you had packed the rods just in case! 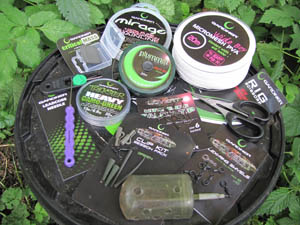 The tactics to be used were to be similar to current carp tactics but slightly adapted to deal with the flow of water and also to make certain that the fish did not spook on the line. 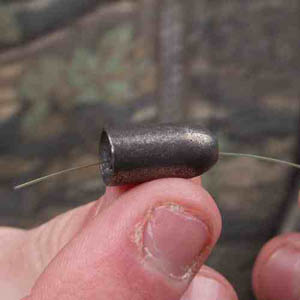 Before tying the mainline to the spliced Plummet leadcore leader I slid on a medium Gardner ‘Pin Down’ flying back lead and small rubber bead (to avoid damage to the knot). The length of the leadcore used was much longer than I would use if I was fishing for carp, so on this occasion I was using a 4ft length to make sure everything was pinned down.

At the business end was a Covert Lead Clip set up combined with a large blockend feeder. The swivel on the feeder was removed and replaced with a size 12 Covert Flexi-ring Swivel to allow it to fit smoothly onto the lead clip, and to allow the clip and feeder to lie flat on the river bed.

The chosen hooklink was 12lb Mirage, and was approximately 14 inches long with a piece of super dense Critical Mass Tungsten Putty moulded half way down it to ensure that it was also pinned down. Then using a basic knotless knot I tied on the size 6 Wide Gape Talon Tip. With this arrangement I find that I get very good hook holds without having to use shrink tubing – probably in part due to the slight stiffness of the fluorocarbon material. The fluorocarbon hair also keeps the hook tucked nicely behind the bait without there being too much movement. 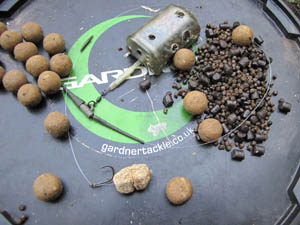 I always find baiting up without fishing really builds up the excitement before a session. It also makes me feel more confident that there is the chance of getting a good fish first session.

My first fishing session was on a nice mild night, just after a couple of days of rain. With the added colour and flow to the water I felt very optimistic the fish would be on the munch, and feeding much more confidently.

When I arrived at the river I snuck into the swim with just one rod (with bait dropper attached) and I introduced a few droppers of bait over the baited spots. If I was fishing during the day I would bait at regular intervals, however fishing nights means getting some shut eye so my approach is to apply a little more bait at the beginning of the session. Then a bit more again before going to sleep I will apply a little more (or if I am lucky I will apply some more bait after a fish!).

I made sure everything was set up well away from the swim to minimise any unnecessary disturbance; something that can sometimes be difficult in tighter swims but something that is definitely worth doing. This time I even set up the shelter out the back of the swim and then slid it into position very quietly. 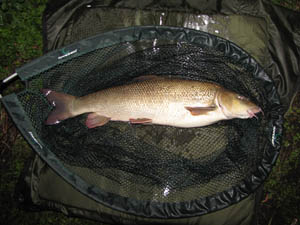 The first night went according to plan with a Barbel of 8.11lb setting off the bite alarm, with my Nano Bug Indicator slammed up to the rod and line peeling off! A fabulous fight followed, and finally the fish was netted at 3.50am. This fish came from the spot underneath the overhanging tree where the strong tackle pulled the fish from the snags. 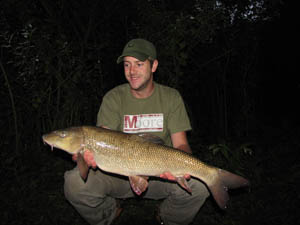 I re-baited both rods and introduced a few more free offerings and quickly got back into the warmth of my shelter and into my very toasty Crash Bag.

I was joyfully woken at first light to the sound of the second rod screaming off. Most definitely my favourite alarm clock in the world, waking to the beautiful sound of success! With only a little time left before I needed to pack up I slid the net under a gorgeous 9.13lb Barbel. 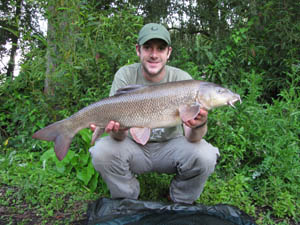 Since this first night I have had plenty more Barbel to just less than 10lb from the same stretch of river – but the larger fish have still yet to show themselves. I have varied using Mirage fluorocarbon and the soft and smooth Trickster Heavy braid for hooklinks and have caught on both, but have found I got more bites using the fluorocarbon on this particular stretch.

Having now moved off the Kennet I am concentrating on beating a few more PBs. I will be chasing Perch on the Thames and Roach and Grayling on the River Test for the next couple of months. I will be back on the Kennet in mid-February though and will hopefully have some reports of worthy captures during the coming winter.