An Autumn Afternoon – By David Dauchy

After a week of unseasonal warm weather throughout France I attended a friendly 48 hour fishing competition. The rules for the event were simple: 1 angler in each swim, 3 rods each and a draw to select your swim. Interesting… 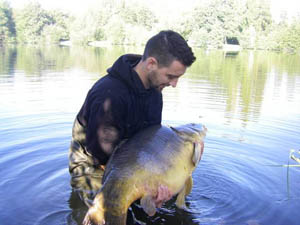 Before proceedings kicked off I spent some time walking around the venue, looking and locating the most interesting features in the water trying to work out where I should fish. The venue looked really promising, and with 18 anglers for 19 swims and each angler being allocated about 1 hectare of water all of us had a nice bit of water to fish.

The lake is surrounded be trees and wild nature which always makes for nicer fishing, and we assumed that a number of surprises would be swimming around in its depths.

My name was drawn second from last, but it wasn’t a big deal since the swim I wanted was still free. It was quite a snaggy swim, with a hard bottom. Why had I wanted this swim in particular? Well the whole area was in the shade during the hottest hours of the day so I thought it would be likely that fish would visit it to chill out in the shade, and maybe have a little feed… 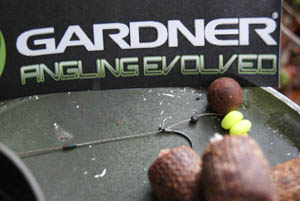 I baited a small patch in the shade under the overhanging branches with some Sticky Baits Stic’n’bag Mix BW together with a mixture of small seeds and sweet corn. This spot was fished with only 1 rod. For hookbait I used a couple of grains of Enterprise Tackle Plastic Maize on a KD rig, tied to some green 20Lbs Trickster Heavy green hooklink and a size 6 Wide Gape Talon Tip hook. It was that simple!

My other two rods were fished on a hard bottom and a patch of silt. I’m baiting with some “Stic’n’bag Mix BW” and a few crushed BW boilies. I’m using a snowman presentation made of a BW boilie and a Peach’n’peeper pop-up, attached to Gardner materials. Now we’re angling.

Even though it was the autumn the temperatures were as high as August!  Unsurprisingly, there was no real fish activity around the lakes and it looked like things would unfold during the cooler hours at night.

As it happened I was proved right, as around 10:20PM on the first night a few beeps on the single rod spot caught my attention, immediately followed by a huge rush. After 15 minutes of an incredible fight on the close margin, the fish tolled into the net, which seems very, very heavy all of a sudden! 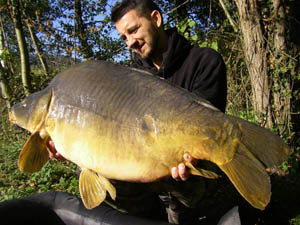 After a difficult weighing, the needle on the scales stopped on 23.5Kg! I then put the fish into the retention sack for the night. Later in the morning this lovely carp was returned to freedom after a few pictures were taken.

At the time this was the biggest fish caught from this lake… and as a result I was leading the competition!

The rest of the week end was very quiet for everyone due to the hot temperatures – so quiet that the competition ended in my first victory for Sticky Baits and most of all for Gardner!