At the beginning of October I spent the first three nights I had available back on the big Bream lake hoping that a monster might put in an appearance. Waking on the third morning of the session without so much of a bleep I knew it was time for a change. I was still enjoying my time fishing for the Bream but I felt my fishing was becoming a little stale after fishing the venue since the end of July and felt in need of a change.

Looking at the long range weather forecast, conditions still looked mild and with rain on the horizon so I thought it might be time to have a little dabble on my local River Blackwater. This venue is much underrated and having landed a succession of big fish from the river in the last couple of years I knew it would be a good place to start. After priming a swim for a few evenings with a mixture of hempseed and mixed sized pellets I felt the area was ‘ripe’. My first evening session lasted two hours and after a succession of line bites and fish rolling downstream the tip pulled over and after a spirited fight I was soon landing a good chub weighing 6lb 1oz. A smaller sample of around 4lbs followed soon after, with both fish falling to small Enterprise Tackle imitation pellets. A quick session after work two days later produced a Barbel weighing 8lb 12oz, and things were starting to come together nicely and I felt that it was only a matter of time before a big fish put in appearance. How right I was, but it was not to come from the venue I was expecting it from!

I had been planning to focus my winter fishing around targeting some very big perch that I had already had a few attempts at last winter and knowing the venue had produced fish over 5lbs in the past really wetted my appetite. I wanted to visit the water before the weather got really cold so decided to book a Friday off of work in the hope that it would be quiet. Travelling down with fellow Gardner employee Paul Maltby we arrived at the venue and with the pick of swims I quickly choose a quiet corner surrounded by overhanging bushes. After finely chopping a mixture of worms I added a handful of dead maggots and casters before introducing the bait accurately onto a far bank shelf using a trusty homemade bait dropper.

I tackled two rods up using 6lb Hydro Flo mainline, with a 1oz lead running on the main line to a Covert Buffer Bead and a size 8 Covert swivel. Twelve inches of 5.5lb Mirage Fluorocarbon was used for hook length material which was tied to a size 8 Wide Gape Talon Tip hook. My hook bait consisted of one real lobworm tipped off with a Enterprise tackle buoyant imitation worm, which not only balanced the hook bait perfectly but also gives an excellent flavour leak off which I hoped would make the hook bait stand out in the coloured water.

The first two hours of the session were very quiet and I hadn’t received a knock. This isn’t unusual for the venue as it does not hold a big head of Perch. I kept the feed going in regularly and my first bite produced a 2lb 6oz fish. An hour later and my left hand rod produced a slow steady take which pulled the bobbin to the top, against the rod blank. A firm strike was met with the tell-tale head shakes as a second perch was hooked. It didn’t feel a big fish at first and my thoughts were that it was probably a similar size to the fish I had only an hour before. It wasn’t until it tried to get in under my own bank and after some heavy side strain the fish surfaced that I realised what I was attached to.

After taking it easy for a minute or two I was soon guiding a large perch over the waiting net. First thoughts after lifting the net that it was probably around 4lbs but it wasn’t until I rested the fish on the unhooking mat that it dawned on me what a magnificent creature it was. After quickly unhooking the fish and letting it rest in the water for a few minutes to allow the fish to recover this also gave me the opportunity to get the scales and camera gear ready. After zeroing the sling the needle swung past the five pound mark and we settled on a weight of 5lb 4oz. 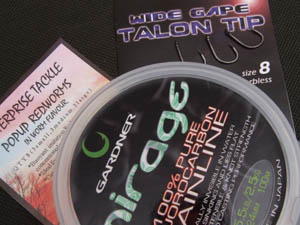 I was totally blown away and I couldn’t quite believe what I was seeing, the fish was so thick yet certainly had more room to pack on a few ounces later on in the year. After a few quick pictures and capturing the special moment on film I slid the biggest perch I am ever likely to lay my eyes on back into the water and watched her swim away, a moment I will never forget.