I always look forward to the month of September; the banks start to get quieter, but the fish bigger and hopefully on the feed! 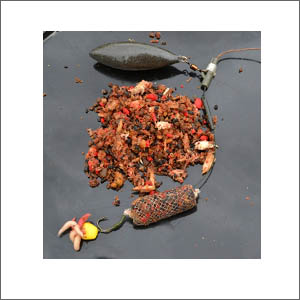 My fishing this month started off with a 48 hour session on the prolific Brasenose-2 on the Linear complex with my sister. The session started very badly, losing the first 6 fish in really bad weed. But with a quick change of the lead system, taking off the tail rubber and using a bit of tape to hold the lead in place on the Covert Multi-Clip, we were soon landing every fish.  Tactics were a maggot-based spod mix, clouded up with some Kent Particles tiger nut groundbait and a bit of particle, then fishing short hooklinks of 25lb Camo Green Sink Skin, and a size 8 Covert Wide Gape Talon Tip, the hookbait being a piece of fake corn with some maggots on the top with the use of a small match hook! 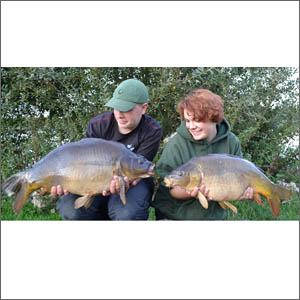 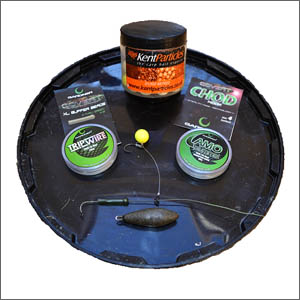 I planned to spend the rest of the month fishing my local syndicate lake, in search of a monster. The lake is a large, open gravel pit of roughly 55 acres, containing around 100 fish to mid 50’s. The first time it got to the lake, the weather was quite overcast and rainy, and I arrived at first light to try and spot any signs of fish, it was certainly an effort to drag myself out of bed for 5am! As I got light I was perched on the edge of one of the platforms on “The Pub Bank”, and as luck would have it, 2 fish showed at range from the swim I was in, so I quickly ran back to the car and grabbed the gear. I chose to set the rods up on 6ft Camo Plummet leadcore leaders with the bead set at the very top of the leadcore, with 3” chod rigs made of 20lb Tripwire, a size 6 Covert Chod Hook and a size 12 Flexi Ring swivel. I then had a large ring on the end of the leadcore, to which I tied a 3oz lead with weak 3lb mono, and this pulled inside a Covert XL buffer bead! I chose to use a 15mm Kent Particles Pineapple Hawaiian pop up on the hook, and spread about 30 20mm Shellfish B5 around the rigs, which were cast to some areas with slightly less weed I had located with the marker rod. Unfortunately, the fish seemed to move off soon after I had cast out, and despite watching the water intently for the next 48 hours no other fish were spotted.

I did another 48 hours the next week, but with no luck, but I did see a few fish showing at range from “The Winter Bank”. So for the 5 nights planned for next week I knew exactly where I wanted to be fishing!  Luckily the swim was free when I arrived , and it was good to be fishing with my dad this time and he dropped into the swim next door. I soon found a clear area at just over 100 yards, and put out roughly 10kg of Shellfish B5 with the spod, but made sure it was spread nice and wide!  Well, it was a long wait! On the 5th night my middle rod pulled tight at around midnight and I lifted into what I thought was a tench, and bullied it all the way to the net!  It was only when I reached back into my bivvy to try and unhook the “tench” in the net that I realised I had a rather large carp! It only took one look at its scaleless flanks and huge bulk for me to identify it as “The Big Leather”, so I quickly gave it the shout and then ran and woke dad up for the photos!  On the scales it went 45lb, and looked in pristine condition, and in no time I was slipping it back into the crystal clear margins.  Rods back out and hopeful of another bite, but nothing came my way so I started packing up in the afternoon, already planning a return the following week! 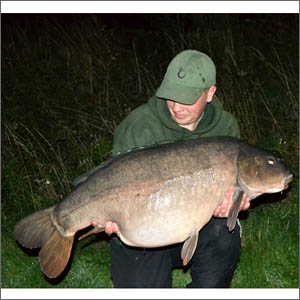 I did manage to get back the next week, and again put in 5 nights, but the carp just weren’t playing ball, and my fish remained the last one caught for over a week and a half!  Hopefully the weather will improve during October, and really make the fish get their heads down, but I certainly didn’t mind being able to get down the lake for a few hours and have a go on the surface at the end of the month!  Now I am at University (but living at home!) I’m back to fishing with the weekend crew and hopefully fitting the in occasional overnighter I’ll be able to get another lump before the lake has 3 inches of ice on top of it!

See you next month!