I have not managed to get out fishing as much as I would have liked this year but when I have I have been very lucky. Some may say jammy! 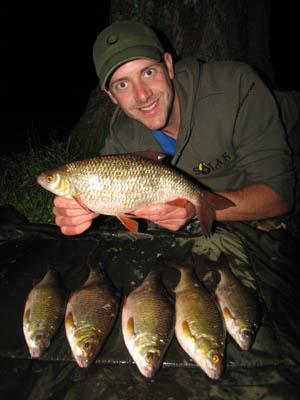 I was having a discussion with work colleagues about possible areas of river to go and have a bit of a trot for some roach. Many areas were discussed but I had one in mind. I knew of an area of the River Itchen which in the past had produced several good Roach to 1.8lb. I hadn’t visited this stretch for a few years and my mind started to go mental, imagining how big the roach had got or if they were even still there!

I decided to put my mind at rest and go and check out this old roach haunt. On arrival it was apparent the shoal was still there and the fish had clearly increased in size and numbers. I saw three fish which appeared over the 2lb mark and plenty around 1lb to 1.8lb. It was too tempting to leave, so I rushed home and grabbed the kit. Bait choice was white maggots, some bread which got blended into crumb and some CC Moore’s Hot Hemp to add to it.

I got back to the river just before dusk and started off baiting the area lightly with bread crumb and the Hot Hemp and a few maggots. I then let the swim settle and allowed the fish to get more confident in there feeding. During this period I set up my tactic of choice. 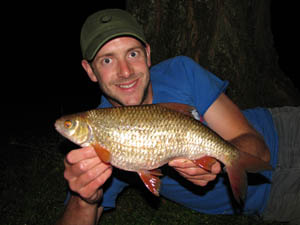 Due to the slowness of the flow I decided I might be able to use a rig I had been using for Rudd fishing earlier in the season on one of the Farnham AS waters. 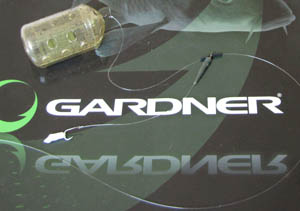 I was fishing a light quiver tip rod, 3lb Gardner Hydroflo Tru Clear mainline, and a short 4lb Mirage (fluorocarbon) hook link to a size 14 Korum Series S4 Hook. This was set up as a 2 inch popped up rig with a block end feeder below containing white maggots and Hot Hemp. I would normally fish a buoyant bait with this combined with white maggots. I decided to give just the foam a go, a small triangular piece of Gardner Rig Foam in white. I thought this might work as the feed going out was white and I knew white bread got fed to the ducks in this year. I wanted to wait for decent bites and not risk losing bait regularly and having destroyed maggots on the hook.

Once set up I put a small amount of feed out again and could see the larger fish come in to feed. This was a sign enough for me to get my rig out. First cast and within seconds the rod tip slammed round. A great start, but sadly only a small roach of around 8oz. But… it was still a roach on a white piece of foam. I went on to catch a number of Roach around up to 1.8lb and then on the last cast I connected with one of the target fish! Result! Yet another PB this year in the shape of a 2.1lb river Roach. 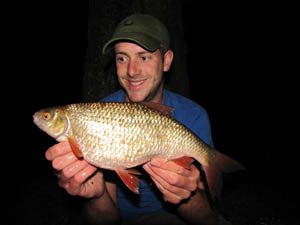 I have revisited this section of river a few times since but have not had anything over 2lb since, although I’ve had a few other good sessions with some great bags of Roach to 1.12lb. Just goes to show it is definitely worth visiting favourite spots you used to fish many years ago.