Into the Unknown – by Ed Mason

I started the year off baiting a particular area of the lake, historically a part of the lake that fishes well in the spring. This plan worked pretty well, producing 6 fish on the bank and dropping just one. Pretty soon I got into a routine of baiting up on a Wednesday and Friday with a variety of baits. To begin with this baiting was predominantly particles, with the long term view that the bream, and hopefully a few carp would keep the areas clear of the weed that was bound to continue to grow throughout the summer. The main bait that I introduced along with the particle was ‘Tiger Baits’ Four Seasons, and with time I slowly started to move away from the particle and just focused on getting the boilie established.

The six fish I successfully caught all fell to the infamous Chod rig fished over the baited area. I found that a modest 2½ to 3 inch Chod rig seemed to sit nicely enough on the debris, and was also a precaution incase the weed started to encroach onto the baited areas as there was less particle being applied. Each fish was hooked perfectly with a size 6 Gardner Chod hook used in conjunction with their 20lb ‘Trip Wire’ stiff hook link material.

The lake itself is a bit different!

It’s a large gravel pit with numerous islands; large deep areas; no-fishing areas; and channels which lead to other lakes. It contains a low stock of fish, of which not a great deal is known; although the quality of the fish it produces is very well known to some.

The area of the lake I chose to target was the narrowest part of the lake. Well I call it narrow, but it was still approximately 200-250 yards to the opposite bank, and could only be fished at night. No bivvies are allowed in that area of the lake as swimmers, wake boarders, jet skiers, speed boats all use from 8am till sunset.

The idea of fishing this part of the lake was that it was somewhere in the middle of other known areas, so I would hopefully catch them out when they were on the move through my area. I did initially try baiting another ‘out of the way’ area of the lake but found no matter how much bait I used I couldn’t keep the fish in the area, so catching them on the move seemed the way to go.

Fishing this area is naturally a little bit tricky; to my left is a jetty that goes out along side the lake about 120yards, and to my right there are ski ramps and overhead ski cables! Landing fish is perfectly safe but the Gardner 22lb HydroSink braided mainline helped when the fish buried their heads in the weed off the jetty.

Realistically any fish from this lake is a result, and as I had taken 6 in the spring I was over the moon. The fish ranged from 17lb – 25lb; all really stunning fish, 3 commons and 3 mirrors. However, knowing what I had seen with my own two eyes in this lake I was a bit ‘unlucky’ (but didn’t really feel unlucky!) on the sizes of fish.

Due to work commitments I didn’t really get a chance to do much angling in the height of summer, just a handful of nights and the odd walk around. So by the time we were well into September the few people that were fishing the lake seemed to be baiting the deeper areas of the lake, and I had heard that a few fish had been caught from these areas.

In the end I did a few nights down this end of the lake after I saw a few fish show close in on a long bank that rarely gets fished, but it resulted in a couple of weekend sat blanking.

Then we had freak hot weather hitting us; with temperatures soaring to over 28 degrees at the end of September into early October, so I pulled off the deeper areas and moved back to the ‘middle spot’ with view that the fish would be on the move in the night to and from the shallows. This time not bothering with the particle I baited with just the Tiger Baits Four Seasons boilies which the carp had seemed to really enjoy earlier in the year – along with a few other mixed baits (any baits I had left in the freezer).

So Saturday night I turned up to see the water skiers still going round close to my bank, and they kept going until it was almost dark, obviously making the most of the weather the same as I was. Once they left I got the rods out, all set up with Chods as before, and got them out on the spot, fishing the middle one bang on the baited area and the other two just off it on either side.

I sat back semi-confident that I was in the right place and doing the right thing. It wasn’t long before I started getting liners which kept me awake and interested, I thought I saw a fish roll over the spot but wasn’t sure in the dark, and the mist was very thick and there were a few coots about which was worrying me.

At 1.45AM I was woken by an absolute ripper on the right hand rod. Line was peeling off the spool like there was no tomorrow, and this on the rod that was the closest to any sort of danger.

Soon I had the rod in my hand and everything went into auto pilot, gaining a bit of line back from the fish which was now doing deep heavy runs, so hopefully I was in control. I started making my way out on to the jetty to my left with the net over my head so I could still use both hands to control the fish.

After about 10 minutes or so I had it in close, but without having a head torch on my head I still wasn’t sure what I was playing. All the fish in there go mental once hooked, but I had a feeling this one was a good-un. Finally it was in the net with the Hydro-Sink thoroughly tested. I took a look and couldn’t believe what I was looking at. I thought it was a thirty pounder but wasn’t sure, so I quickly unhooked the fish on the mat and sacked it up waiting for photos. The next couple of hours was spent wide awake buzzing! After being on the lake on and off for 3 years all I could think was that I have my first 30 from the venue and its an original common too!

Having got the rod back on the spot, I eventually found a way to nod off back to sleep, only to wake at 5a.m to see the left hand rod peeling away!

My first thought was that this is a dream but again I found myself holding the rod connected to something that wanted to get as far away from me as it could and QUICKLY!

This time I had to move much faster, the fish was giving me nothing and I had to get to the end of the 120 yard jetty with the net as quickly as possible whilst avoiding giving any slack and also trying to steer the fish away from the few weed beds that are dotted about. 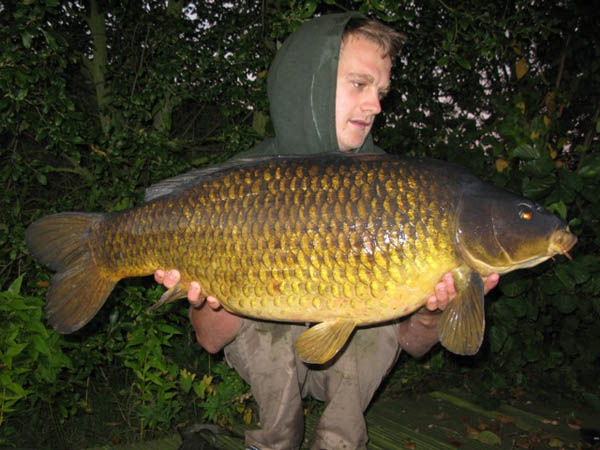 By this time a few people had turned up to swim or cycle or something, so I wound the remaining rods in and got someone round to do some pictures and weigh the fish. I thought I had a 30lb common and a high 20 common ready to be photographed.

It turned out the fist common went 34lb 8oz and the second common 30lb 2oz. I couldn’t believe it, and am still buzzing while writing this almost a week after!

The successful rig comprised the following –

•    Tiger Baits ‘Four Seasons’ Pop-up
•    Sixe 6 Gardner Covert Chod hooks.
•    Gardner Trip Wire 20lb.
•    A 6 foot length of lead core that had 4 foot gap between beads to allow the Chod rig to sit nicely on top of any ‘chod’ and weed on the bottom.
•    22lb Gardner Hydro Sink (would have had no chance without this!) combined perfectly with soft 2 ½Ib test curve rods. 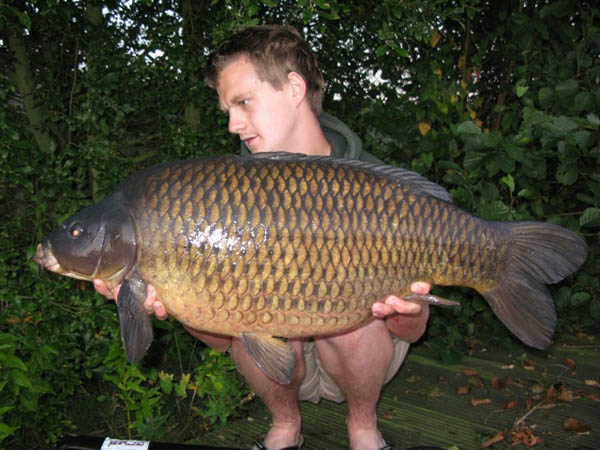 The last thing I have to mention is the Deluxe Bed-chair Cover from Gardner.  Without it, it would have made my nights very wet and un-enjoyable. One morning I woke up with puddles on top of it and I was bone dry underneath, none the wiser!