A New Mission – by Mark Wosencroft

I pulled up in the carp park and the excitement of fishing a brand new water was almost too much to bear! The owner was not around yet to collect my ticket, but as it was only 7am they were probably still tucked in bed. That’s what you get for being keen I suppose! Oh well.

In the meantime I thought it would be a good idea to take a little look at the lakes to get a feel for the place and maybe try and sneak some information from the locals – not too much mind, as I do like to work things out for myself to a certain extent – but finding out the stocking levels, etc is never a bad start. So it was off on the first circuit of the lake with an empty cup in my hand…. 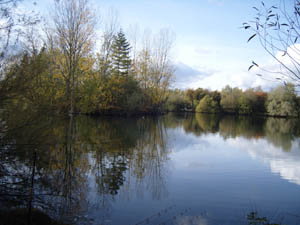 Luckily it didn’t take long for me to find someone to fill it for me and give me all the needed information that I craved for. My newly found friend not only made a cracking cuppa but once we got talking I couldn’t shut him up. The stuff he told me was absolutely priceless, plus he had done quite well himself this season seeing as it was his first on the complex. So with plenty of handshakes I made my way back to the car park where the owner greeted me and gave me my ticket. Happy days! After thanking her profusely I made my way to my car to unload the usual mountain of gear.

As this was my first session on the water I was under no illusions that it might take a while to get amongst the fish. The lake is about 9 acres and absolutely crystal clear. In fact you would swear it had just come out of the tap! Nice. 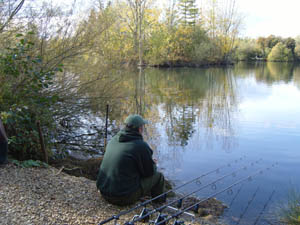 I plotted up, and within 24 hours I had lost two carp!! In some people’s eyes that wouldn’t be seen a good result, but I always try to look on the positive side in every fishing situation, and at least I had received some sort of action and hopefully I would see one at the bottom of my net very soon.

A lot of the carp were cruising on the surface due to the unusually warm weather we were experiencing for the time of the year, so I used the fact that they were not feeding in the daytime to spod a bit of bait into a silt pocket I had found with the marker float the day before. I was using a textured lead so I could pick up some sediment from the bottom of the lake, this gave me the opportunity to see whether the silt was sweat smelling or not. I was lucky as it smelt really ‘carpy’ and not rancid or old. This clear silt patch was surrounded by weed – not the really thick stuff but thick enough if a hooked carp buried itself in it to be a problem, so it was really going to be hook and hold stuff and my terminal gear was going to be tested to the full. 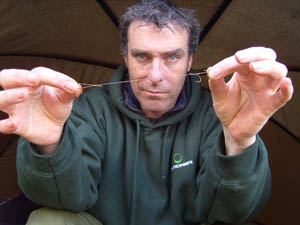 You really need to have total faith in what you’re using in this type of situation, the Gardner Incizor hooks are the best out there in this situation where they are going to be tested to the maximum; and coupled with the Sink Skin then it’s a bit of an unbeatable pairing. To ensure everything was pinned down nicely behind the lead I chose the Camo-Plummet leadcore. This colour sectioned leader really blends in with surrounding features, and the last thing you want to be worrying about is if Mr Carp can see your rigs etc. 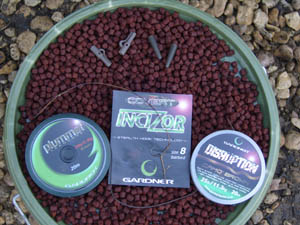 With one more night to go I decided to lump in the bait, so out flew 10 kilo of Sticky Baits ‘Vor-tex’  boilies. I knew that these carp really like their bait and I was giving it to them big style, plus I was mixing it up with the new sticky hemp and bloodworm pellets. By the time I had finished I was covered in spod mix but I was confident the effort would be worth it in the end. I had also had some sexy custom ‘wafters’ made with small cork balls in the middle so that the wafter just lifts the back of the hook off the lake bed. The theory being it won’t take much to suck these up, and hopefully nail the fish. 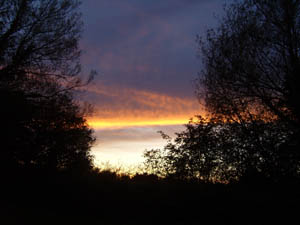 That night the carp were going nuts, rolling and crashing over my area. I was thinking ‘any second now and I’ll be battling with a carp’. The amount of liners I was getting was outrageous, and I really had to sit on my hands to stop myself keep striking into fresh air all the time and spooking what carp were in my swim.  After a night of broken sleep I was slightly disappointed to wake up carpless.

With only a few hours until I had to leave my right hand rod roared off and I found myself latched into one very angry carp. It didn’t matter how much persuasion I tried to give the unseen carp I couldn’t seem to sway the battle to my way. After what seemed an eternity I eventually had it ready for the net and when it did its final roll on the surface I realised that I had a bit of a lump on the end. Due to the long battle I had with that carp and the fact that it kited across my swim, I was forced to take my other rods off the rest so the carp would not pick them up, so you can imagine my surprise when the line on one of my rods started stripping off at a rate of knots! 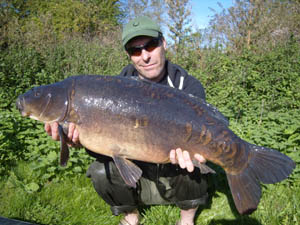 Making sure the original carp couldn’t get out of the net, I duly commenced battle with the next carp, this was less spirited but never the less intensely exciting, and the best was about to happen when I realised my spare net was in my holdall! My only option was to try and get this one into the same net as the first one. It was a bit scary but eventually it met the other one in the net. So with both lines cut to make things easier I then had to haul over 60lb of carp onto the waiting mat. Luckily the new Pro-Mat from Gardner did me proud as it was plenty big enough for the job. 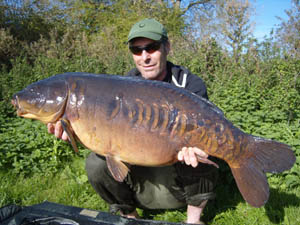 The smaller of the two weighed in at a creditable 30lb 2oz, and the other tipped the scaled around to 37lb 4oz’s and happened to be one of the lakes sought after carp in the form of “Little Poolies”, but size and names are irrelevant when the carp you catch are of this quality.