It had been 9 months since Wayne Rees and I had won the 2010 British Carp Angling Championships, and the time had come round for us to compete in Semi Final 1 of the 2011 event at Barston Lakes near Solihull. All of the BCAC qualifying rounds were complete and the semi final line ups were set, so here is how it all unfolded. 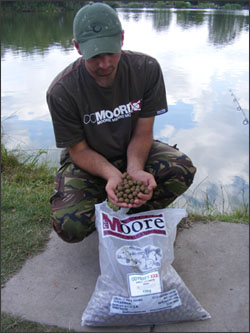 Zig rigs also worked well at Barston, when the fish are in the upper layers of the water column, so we took 15kg of CC Moore Sweet Nut Cloud Mix. Knowing that the lake has a massive head of carp in, we spent hours tying rigs and PVA bags so we were fully prepared in case we got a swim with the potential of producing the huge weights.

In this year’s BCAC semi final the format had been changed to make the match fairer than the previous year. At Barston the majority of the fish tend to hold up at the shallow end of the lake, the reason for this is because most of the bait gets put in here as they have fishing matches on a regular basis. Another reason why the fish seem to like the shallower water is because of the fountain which provides lots of oxygen for the fish. In all of the previous semi finals the format worked with the top 7 pairs of anglers that have the most weight of fish in order qualified. This year the format would work with there being 7 sections of 4 pairs of anglers spread across the lake, the pair with the most weight of fish from each section after the 48 hours would qualify to the final, making the match a lot fairer!

So when deciding the order of which pegs we wanted, we thought tactically. The plan was to choose a peg, which we thought would have the highest chance of qualifying in. Not which pegs would produce the most fish and the biggest weight. The main object of the match was to qualify to the final and not so much about breaking records – even though that would be an ideal situation to do both.

After hours spent swapping and changing our list of pegs, it was time for the draw to commence. The draw was to take place at 9:00am in the bar area, so everyone got seated and there was a lot of nervous tension. With lots of big names in the room, it was sure to be an interesting draw. BCAC organizer and co–owner Rob Hughes asked Barston fishery owner Nigel to pick the first name out of the bowl and it was Bradley Sears/Stuart Harbour who had chosen peg C4. They then chose the next pair of names out of the bowl who were our close mates Kevin Grouta and Matt Wyld. They were as surprised as us and managed to get their first choice peg which was D2.

Six or even more pairs got pulled out with us not being any of them, I started to get more nervous and I could feel my heart rate getting faster. The top pegs on our list were still not taken so we were still optimistic of coming out of the bowl soon and getting a decent peg. Trying to wait patiently for our names to come out was nerve racking and eventually our names got pulled out around 18th out of the draw. What a relief it was!! Our 2nd choice peg was still available so we opted for that which was G4, the rest of the names got called out and the draw was complete.

Happy with the swim choice we were buzzing with excitement, it was time to get to our peg and prepare for the next 48hours which was to see us start the defense of our title as British carp angling champions.

How the match unfolded:

We had decided to start the match fishing with all 4 rods at different casting ranges with simple boilie tactics. This approach was good as it would mean we could see what sort of range the Carp were patrolling in our peg. Instead of piling in the bait like we thought the majority of the pairs would do, initially we started with just applying 40 or 50 baits over each hook-bait with a Skorpion throwing stick until we started seeing a pattern of consistent takes on the spots – once this happened we would be more willing to put more bait out. 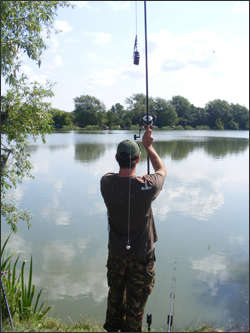 We were expecting almost instant action on the rods but it took over 3 hours for the first bite, my right hand rod being fished at around 70 yards rattled off and I was in to our first Carp of the match. My legs were shaking and I was in deep concentration so I could try and get us off the mark, the fish kited to the right making it challenging to retrieve, in the match all of the competitors had to fish barbless hooks, as this is the fishery rules and I was praying the fish didn’t come off. Having to apply more pressure on the fish as it was still powering off to the right hand side of the peg, with this low and behold, the fish slipped the hook resulting in me losing the fish, DEVESTATED! All I could do was cast the rod back out and move onto the next bite. I have never been great when losing fish…who Is though? But in last year’s BCAC I learned that you mustn’t think about the fish you lose, just simply move onto the next take.

A couple of hours passed and the same rod belted off which meant once again I was into one of the hard fighting Barston carp. It was an epic battle but we managed to land the fish a common of 13lbs 14oz, we were finally off the mark…Happy days! 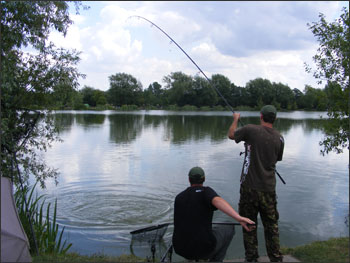 Going into darkness we had landed three fish and we were the only pair to have caught in our section so we were confident going into the night but we knew we needed to keep plugging away to try and build a healthy lead. By 6:30am on the Saturday we had landed 7 fish for 68lbs 11oz. 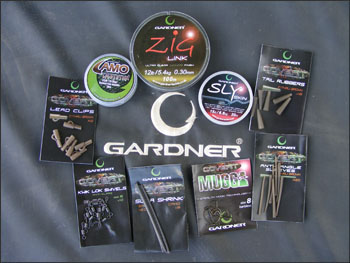 Due to us catching the fish and the excitement of the match we had no sleep whatsoever, but we were happy with our efforts as only one other pair in our section had caught. We had a bit of a gap separating us from 2nd place but we knew we had to keep working as hard as we could to try and extend our lead.  Most of the action had come on my rods throughout the night; Wayne’s rods had been very quiet. We saw a fish crash out at ‘tree line’ range in his peg so he quickly cast a bait onto it. 10 minutes later the rod was away and he landed a Mirror of 10lbs 2oz.

The sun was well and truly up, beaming down with some serous heat at 11:00am, we started seeing fish just under the surface of the water so we decided it was a time for a rethink. 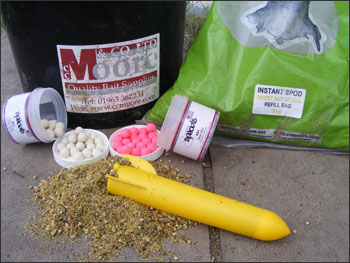 We both recognized it was time to get the zigs out with the fish showing under the surface and lack of action on the bottom rods. All four rods were cast out at different ranges with single hook bait zig rigs, where we had seen fish cruising. Whilst we preparing a sweet nut cloud spod mix my left hand rod stripped line from the reel sending a one toner through the alarm.

We were really pleased that the change of tactics had resulted in an instant take. After that fish was landed (it turned out to be a common of 10lbs 2oz) we spodded the cloud mix over the top of the zigs which only seemed to bring in the smaller stamp of fish. From this we decided to just fish the zigs as singles, with no more spod bait over the top. For the rest of the Saturday we fished zigs and this saw us consistently catch till the late evening. 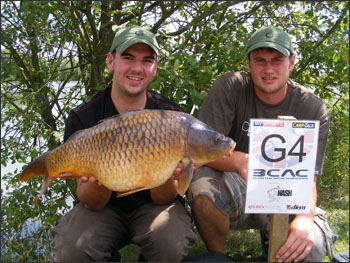 As the light faded we baited up for the night and got back onto the boilie tactics, within an hour Wayne had a take and after a 10 minute disagreement the net an angry common of 20lbs 15oz this was landed – a major boost to our lead. It was an unexpected quiet night with no more fish caught. By 8am we were back on zigs with the first take being at 10am resulting in a double hookup seeing us land two more fish for 12lbs 10oz. From here we landed two more fish for 23lbs before the hooter sounded for the end of the match at 12pm. The zig rigs that we used to catch the fish were made up of a 3ft Zig link tied to a size 8 Covert Incizor hook baited with a CC Moore Northern special 12mm pop up and a small piece of foam. 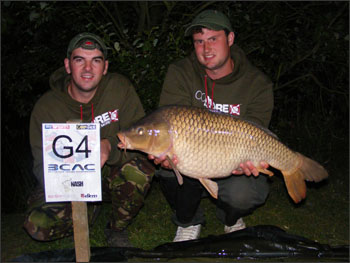 At the end of the match we finished with a total of 17 fish and a final weight of 167lbs 3oz. We were over the moon and had carried on from where we had left off in 2010, leading our section from start to finish sending us through to the final at Broadlands.

Our target was to qualify to the final in 2011 to show consistency and that we are more than ready to defend our title. Being in back to back finals feels amazing, we will go into the final open minded as always. We know that all we can do is hope for the best and try our best.

Roll on the final!!