I am always one to act on tip offs and this was no different to usual. A good friend of mine who I studied with at Sparsholt informed me of some rather large Rudd he had been catching a short drive from home. This information alone was enough for me to hang up the crude carp gear and get out the light rods and lines.

The most productive times for targeting huge Rudd are dusk through to just after dark. This meant I was going to have to put a night session in to increase my opportunity of bagging one of the biggies! When I say biggies we are talking a few over 2lb and the possibility of a 3lber.

My target was to get a fish of over 2lb.

On arrival to the lake I could already see there were a number of Tench and Rudd rolling on the surface. This is always a fantastic sign at the beginning of a session. Sadly I also knew I would have to do a bit of clearance work on this particular swim as the weed had grown up pretty quickly and would need thinning so I could maximise the presentation of my bait and end tackle! For this I used Gardner’s ‘Original Weed Rake’. When I first saw the rake I was expecting something similar to the size of a normal garden rake. This was not the case as it only measures approximately 5”, but as all real men will say, it is not the size but what you do with it that counts!!! 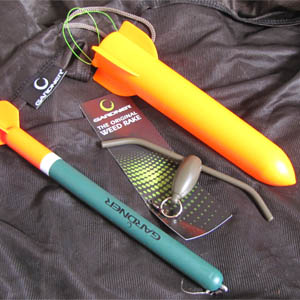 The Original Weed rake is awesome and really does prove size isn’t everything. Within a few casts I was confident I had a good sized clear area to position both of my baits.

The marker float went out and confirmed I had done a fabulous job of clearing the area; this was followed with six spods (using the Gardner XL Pocket Rocket) of CC Moores Hot Hemp mixed with some white maggots. This I hoped would be enough to get the Rudd feeding again after all the disturbance and hold them there for a while.

On the business end of my set up, I was using a small Drennan feeder, a couple of float stops in this case the Korum Rubber Stoppers, a small size 22 swivel covered with a small rig sleeve to avoid any unwanted tangles. 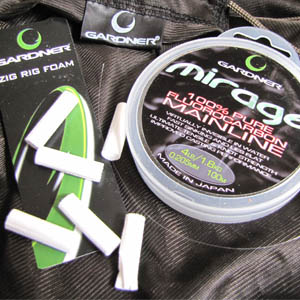 The hook link was tied using Mirage Fluorocarbon Line in 4lb. Fluorocarbon is perfect for providing fantastic presentation due to its properties making it almost invisible in most water conditions. I was using size 16 wide gape hooks in the finest pattern possible without risking the hooks straightening. The bait as can be seen in the photo was simply two white maggots tipped with Gardner’s White Zig Rig Foam allowing the maggots to pop up off the bottom making them more visible to passing fish. 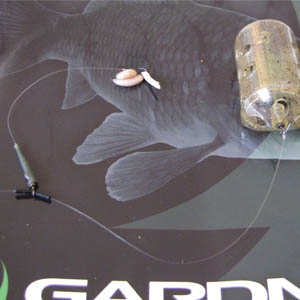 After a final chat with the man in the know, I was feeling very confident. Using the marker rod which had been paced out to the correct distance behind the swim I was able to make sure I was clipped up each cast, ensuring accurate baiting and presentation was maintained at all times.

I was not expecting what happened on my first cast. BOOOM! First cast = Target Fish!!! Does fishing get much better?! 2.7lb of prime Rudd in all its golden glory. I was buzzing and could not quite believe it. Was this the start of an epic red letter day or just a lucky moment?

I quickly got the lines both out again and continued to get plenty of Rudd action, almost too much. The bites were frantic and to be quite honest a very exhausting start to any session.

Two hours in and already a broken man. I continued to keep the bait going out each cast and when bites slowed slightly I put four more spods of the Hot Hemp and maggots over the spot again. This seemed to instantly get the fish competing again for the bait. I eventually had to reel in at 11.30pm as I was shattered. I had had quite a few more Rudd up to 1.12lb but sadly no more over the magical 2lb. But this did not matter as the fishing was so much fun and I had achieved my target.

I think if more people were to act on reliable tip offs and go prepared, you might surprise yourselves and hook into that fish of a life time. Who knows it might even give you a boost to try for a different species, maybe a break from the carp you have been chasing for the past 5 years and ignite something new and exciting in your fishing. 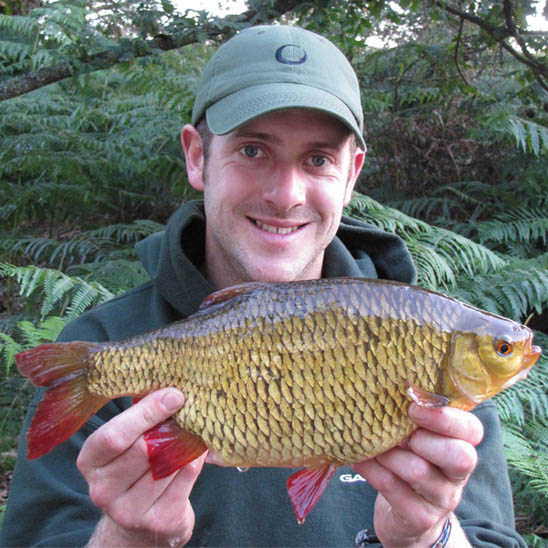 Whatever it does for you I hope when you next get a call about a monster or two, no matter what the species, it gets you excited enough to get out there and bag one!!!