Its been an extremely busy year with my angling since I decided to take up competition carp fishing at a serious level. As any of you that compete in these competitions will understand it takes up a lot of your angling time and often means you miss out on the best times of the year and weather conditions on the other lakes you are targeting.

Last August, half way through the first year of a new syndicate being formed, I acquired a ticket for a 30 acre weedy, clear gravel pit that had previously been left untouched. The stock of the carp was really unknown, although people that had walked the venue guessed the stock of carp to be around 15 fish, ranging in size from mid-doubles, to possible upper 40’s. Within the first half of that year around six of the lakes original stock made an appearance to the bank, with the biggest being a beautiful heavily plated ‘Leney’ mirror of 44.04lb’s. The lake was also stocked with around 75 Italian strain fish with an average weight of mid-doubles.

When the opportunity came to join due to members dropping out I was more than happy to grasp the opportunity with both hands! After seeing the pictures of that beautiful Leney my target for the lake was set and after paying my money I was finally able to start fishing.

If my memory is correct my first 10 nights didn’t produce a fish. I had never fished a lake as weedy as this one and was struggling to get my head around it. Eventually things started to fall in to place and I started to catch a few stockies up to around mid twenties. By late September I had managed six stockies and I had also lost a fish known as the ‘Fat Pig’ at the net on one of my visits. It was around this time that I got caught up in all of the hassle that comes with moving house and my fishing really took a back seat. I only managed one more session that year that didn’t produce a fish for me. As you will all know the weather took a turn for the worst with heavy snowfall and hard frosts that lasted for a very long time and this put my fishing at the lake on hold. That winter I enjoyed some good river fishing on the Test and Itchen with my friends and even managed a new personal best roach of 2lb 5oz 8dr.

It was not until around March that I finally managed to get back down to the lake and it was soon made clear by the other members that I hadn’t missed much, as the last capture of a carp was in November! The harsh winter really had shut the lake down and it appeared lifeless. I put in a few nights over the next month and managed a few more of the stockies.

It was now April and the start of a busy year on the competition circuit. My first comp of the year was the Media Carp Masters out in France and that was soon followed by many others such as the Carpin-4-Cancer charity match and the BCAC’s. This meant my time on the bank trying to catch my target fish was very limited as I would be practicing on venues and partaking in matches.

Not being at the lake regularly was difficult as it was changing so much on each visit. The fish would always be on the move as they were waking up from there winter slumber and it was to decipher any sort of pattern.

One session that sticks in mind was a quick overnighter I did in May. I had seen fish crashing out at around 150yards from The Pump House so set up in the nearest swim and spread three rods out at that range on single yellow pop ups presented on chod rigs. I then spread around a kilo of 18mm bottom baits in the general area and sat back to watch the water. Fish continued to show and I saw one fish that had me sat on the edge of my seat as I was pretty sure it was one of the big’uns, but it was hard to make out exactly which fish at that range.

I managed a 23lb mirror not long after seeing that fish and it was at this point another member turned up. He set up in the swim next door as he had also seen the fish showing when he was photographing the 23 for me. The guy in question proceeded to follow a similar approach to me and blast out three singles. It was only around two hours later that he had my target fish in the net! I was gutted to say the least having been so close, but that’s angling I suppose!

After that I had a bit of a break from the Syndicate lake and focused on my competition fishing. After my BCAC qualifier on Broadlands I was fortunate to have 10 days off work as I had a holiday booked with my girlfriend in Portugal. The holiday was great and we spent the ten days doing absolutely nothing bar sitting by the pool, sunbathing and reading. Of course my girlfriend was reading all the usual girly trash magazines whilst I had my head stuck into fishing books! These really sparked my enthusiasm to return and try to bank my target fish, so that’s exactly what I did!

Having returned to England on the Thursday my boss very kindly said that I did not have to return to work until Monday! This was great news for me and Friday morning saw me making the 50 minute drive to the lake full of enthusiasm and anticipation. At the lake I spent an hour walking around trying to find the fish and saw a couple of fish roll very close in to the bank in a swim known as the point so proceeded to set up there.

As I was setting up I saw two more fish roll so noted the spots. I had one cast with just a lead on the line to have a quick feel of the bottom. On dragging the lead back where the fish had showed it was evident that they were showing over the fresh weed that was growing. The weed that I brought back on the lead was absolutely brimming with naturals; there were snails, shrimps and caddis all over it. The fish were clearly feeding on these naturals and rather than disturb them trying to find clear areas I decided that I would use a solid pva bag approach and fish straight in to the weed where the fish showed. By using the solid bags I could be sure that my bait would be presented correctly even in the weed. 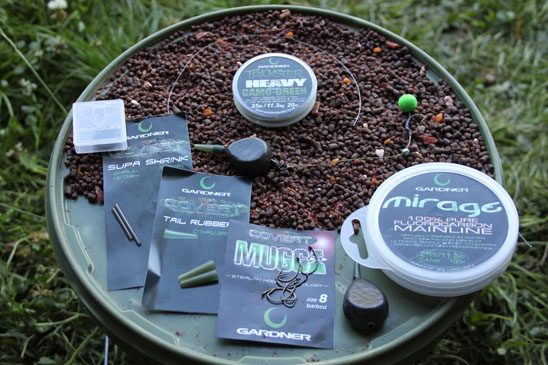 The setup consisted of a drop off lead system so that if I did hook one the weight wouldn’t hinder the fight with the fish. I was using size 8 Covert Mugga hook with 15lb camo-green Trickster Heavy hooklinks that were then attached to 6ft 25lb mirage fluorocarbon leaders. 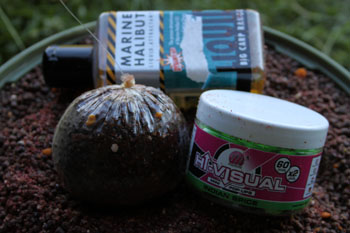 For bait I was using a 10mm Mainline Indian Spice pop up with a mixture of pellets and groundbait in the pva bag. I also put a good glug of Halibut Oil in with the bags so that I would be able to see if the fish were feeding on my bags. It’s a brilliant little edge that I use a lot as when a fish is feeding they disturb the oil in the bag and that then creates a flat spot on the surface of the lake, thus letting you know a fish is on your bait and a take is hopefully on the cards. 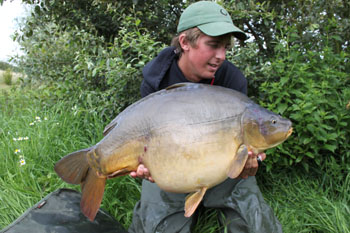 I cast three solid bags on to the spots where I had seen the fish show and sat back full of confidence. The fish continued to show and it wasn’t long before my left hand rod was pearling off. A spirited battle resulted in a 24.08lb mirror. It was a nice start to the session and gave me confidence in the way I was fishing. About an hour later a flat spot appeared over my middle rod and this was shortly followed up by my Nano-Bug jamming into the alarm and signalling a carp was on. Unfortunately I lost that fish.

The rod went back out and I was sure I would be receiving some more action through the hours of darkness that were looming. Waking up at around 4.30am I was shocked to find that nothing had happened so I stuck the kettle on and watched the water and no sooner had the kettle boiled I noticed a slick coming up over my right hand rod. This was followed by fizzing and not just on my right hand rod but all three!! I thought to myself that it only had to be a matter of time before I got a take? Well those fish had me sat on the edge of my chair for four hours before anything happened. I was a nervous wreck!

Eventually though, the inevitable happened and my right hand rod went in to melt down. I struck the rod and it immediately took on its test curve as an angry carp tried to escape. After that first initial run the fight was fairly boring. As I was using drop off leads the fish came to the surface and just plodded there from left to right. It rolled about 15yards out and my legs went to jelly! At that moment I knew that I was connected to my target fish as I saw big sovereign like scales across the flank of the fish. Fortunately everything went ok and I netted her first time! Get in! 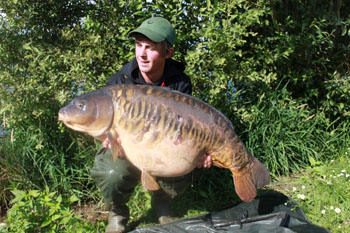 She looked even more impressive on the bank, and on the scales she went 44.08lb. A new lake record and new personal best –  not that any of that mattered to me. I had just caught my target fish for the year! The photos were taken and I carefully held the impressive looking beast in the water until she was ready to swim off. With a flick of her tail she was gone, back to her watery home to go and sulk at the mistake she had just made.

As you can imagine I was not too fussed about fishing after this, and decided to stay to celebrate the capture with a few cans of cider! I even manage a couple more of the stockie commons by the time I left, with a feeling a huge sense satisfaction. I also knew it was time to move on as my mission was complete! 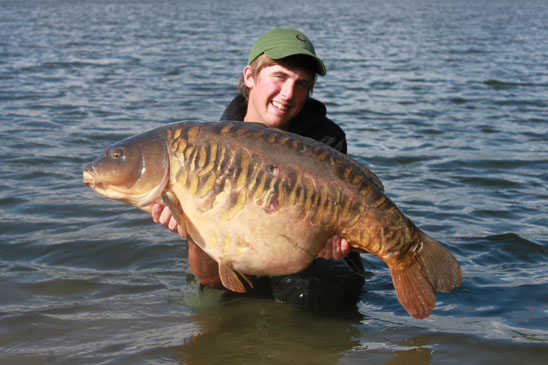