Skip to content
Home|Articles|Catch Reports, Graham Mabey Articles|FLE go and get a result at C4C! – by Graham Mabey

FLE go and get a result at C4C! – by Graham Mabey

For Life Experiences is all about getting people into Angling and Outdoor Pursuit and working with organisations doing good work in the community. When we heard about a charity carp fishing match being held at Watermarks massive Bradley’s Fishery in the Cotswold Waterpark which helps raise funds and awareness for Cancer research we just had to be involved.

Carpin 4 Cancer has been going for 5 years and has raised a huge amount of money to help with Cancer research in the UK. Organised by top-lads Brad and Paul the event has a fun filled atmosphere and is all about enjoyment and helping out charity. 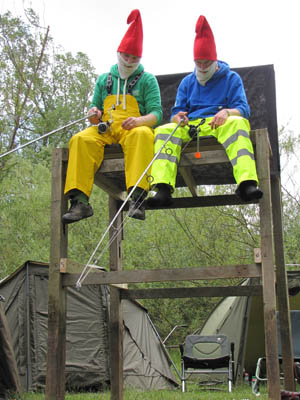 Obviously people want to win the competition and there were some AMAZING prizes up for grabs, but even so when we arrived at the fishery on Thursday afternoon after a week of tuitions at our fishery and Angling School in Hampshire we were met with warm smiles and firm handshake… quickly followed by a beer.

The wind was pushing into the road bank and the weather was overcast with heavy showers, lovely English summertime weather!

Bradley’s is about 114 Acres in size with a massive no-fishing area by the luxury houses which is around 40 acres in size. With 42 pair – YES 42 PAIRS – fishing the match, the amount of lines in the water would put a lot of pressure on the fish. Both Tom and I came to the same conclusion, that regardless of where the fish where at the start of the match once the pressure mounted and the match got underway the fish would go into the no-fishing bay and push out into the middle.

One swim which traditionally is only allowed to be fished by the bailiff gave access to this massive bay and it was obviously going to be the hot swim. We walked the banks and made a list of which swims we favoured over others, we tend to list them as the GOOD, BAD and the UGLY!

We sat down at the draw and waited for our names to come out of the hat. One by one other pair’s names were called out and we started to go under hard as more and more people called out swims on our GOOD list and even the BADS were getting taken! ‘Looks like we would have to settle for an UGLY swim’ I said to Tom. With that our names came out 27th and we had a look at what swims remained. To our surprise there was still one of our GOOD swims available so we shouted out 35 and rushed off to get set up.

This swim was around the corner from the entrance to the no-fishing bay and we both felt that fishing solid PVA bags (boosted with some glug) at long range would be the way forward. It would also be the perfect opportunity to smash the new Hi-S’IVE Freespirit rods about, and see what distances we could do with a solid bag.

The whistle went and everyone around us starting using their markers and spods, we just sat tight tough and chuckled to ourselves as we knew the lake was very weedy and that the fish hate pressure and watched as spods and markers flew all over the place. After an hour we were able to put the rods in and four solid bags got wound up and launched about 130 yards straight out in front, two either side of a large red sailing buoy. We sat back and watched the water content with our tactics.

Even though the wind was blowing a treat and chopping up the water we could see when fish moved over and started feeding on our bags due to the fact that we soaked the pellet in Halibut oil before casting. It wasn’t long before two big slicks appeared over Toms left rod and my right hand rod. We have used this tactic to good effect in other matches and it seems to work, allowing you to keep an eye on what is going on in your swim even at range.

Tom was the first to land a fish during the comp with a mid double mirror and from then on we managed to keep the fish feeding throughout the whole competition. 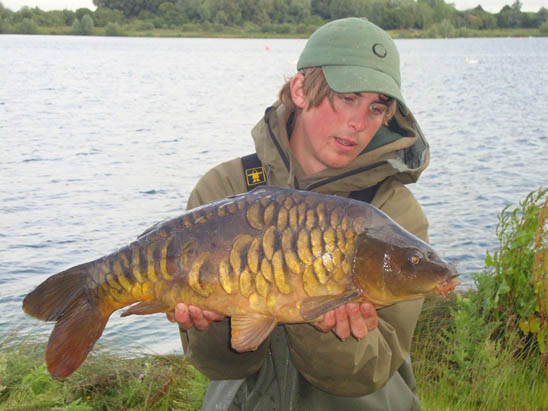 We pulled ahead into the lead and stayed there for the duration. The Mainline baits were doing the trick, with the 10mm yellow Pineapple Juice pop-ups catching a number of fish and I must say they are awesome little carp treats!

We ended the competition comfortable winners with 9 carp for a total of around 130lb. There was a tight battle for 2nd place which was taken with just over 30lb but I have to say we were not really challenged for the lead from the first fish. We also lost four carp in the weed and took over a dozen large Tench which was a bonus.

The winning rigs consisted of size 8 Gardner Mugga hooks to the Gardner Trickster Heavy braid in weed green. We fished these with Mirage fluorocarbon leaders pinned down into the weed with putty, and fished drop-off lead systems to allow us to get the fish onto the surface and back through the weed.

It is worth noting that we started using size 10 hooks which is our normal preferred pattern but after a few losses switched up a size and didn’t lose a fish after that, small changes make big differences and all that!

So the competition finished and we shook hands with all the competitors around us who we had shared a lovely weekend with and then headed over to the main area on the point for the prize giving.

We had not only won the main event but also the biggest fish trophy which was new for this year and dedicated to the organisers son who sadly passed away a few weeks back at the age of 13. He was a top young angler and will be missed dearly by is friends and family and all those that knew him. We will look after the trophy Brad and make sure that it stays in tip-top condition don’t you worry.

The prizes for the event were amazing and alongside this the guys also ran a charity auction to raise money for the Cancer charities. First prize was entry into the 2012 BCAC competition at a venue of your choice which you could pick before normal tickets went on sale!

Now the 2011 event sold out in 9 minutes so this really was a special prize. I also won a week for one at a French fishing resort and some magazine subscriptions and bait. I spoke with Tom and made a decision…… The prizes where going to go into the auction and any money raised would go to charity! My ex lost her Uncle to Cancer a few years back and I know terrible it can be so felt strongly that anything we could do to help would be done.

We ended up raising around £550 for charity through the prizes we donated and in total the event raised a staggering £12000!

Adrian at Watermark heard about our success and the fact that we had donated our prizes and kindly gave both myself and Tom a years syndicate ticket for Bradley’s which we intend to make use of next year and have a real go at getting the original lumps from the water.

So that takes us up to date, 2011 is off to a flying start with a dominating win in France at the Media Carp Masters, a new PB at 44lb 4oz and a good win at the C4C event, plus we raised a shed load of money for charity. 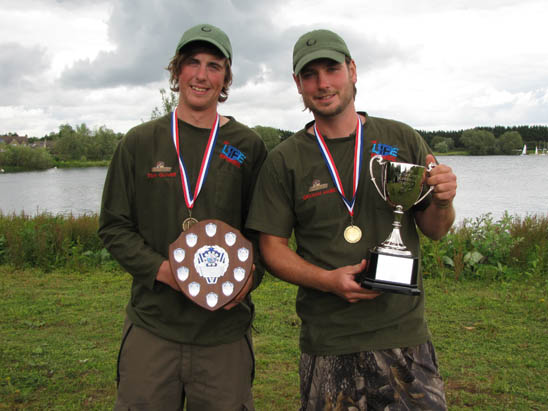