We were invited out to fish this year’s inaugural Media Carp Masters at the new Resort Du Der in the Champagne Region of France. The complex consists of three newly dug lakes that are each stocked with more than 200 carp to well over 50lb. The event was scheduled to start on the Friday morning, so Thursday night once we had finished work saw us loading the gear in to the van and making the last preparations before heading down the motorway towards Dover to catch the ferry.

We arrived in France around 10.30pm that evening and drove through the worst fog I have ever seen for the remaining 4 hours before reaching our destination in the early hours of Friday morning. We got our heads down for a bit before it got light and the gates to the complex opened. Once we were up and allowed in to the venue we were warmly greeted by Hans Sissens, and his team of Dutch marshals that would be supervising and helping out for the weekend.

After all the handshakes and hello’s we had a walk around the three lakes that would be used for the competition, putting the swims in order of favourite for when the draw came around. Lake Berkley was looking good as there were plenty of fish showing themselves all around the lake, particularly in front of peg 2, so this went straight to the top of our list. 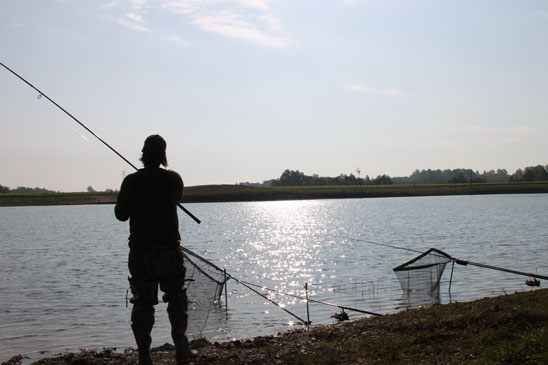 The draw commenced around 2pm and if memory serves me correctly we came out around 6th with our top choice swim still being available. Without further thought peg 2 was blurted out and we were making our way around the lake to start setting up. It was immediately clear that fish were present in good numbers as we saw around 5 fish crash clean out of the water in the first half an hour of being in the swim.

After the hooter sounded we cast solid pva bags filled with mixed size trout pellet and halibut oil to the areas we had seen fish crashing. For hook baits we used two grains of pop-up maize fished around an inch off the bottom with size 4 Long Shank Mugga hook and 25lb camo green Trickster Heavy hook links of around 6 inches.

It didn’t take too long for the first fish to start getting caught and swim 3, next door to us soon had a hit of around three fish landed before we had even had a bleep! Doubts started to cross our mind on whether we were doing the right thing as swim 3 were using a boilie over spod mix approach, however that thought was soon eradicated when one of my rods rattled off at a rate of knots! The fish put up a brilliant account for itself and we soon had an upper 20 mirror in the net. 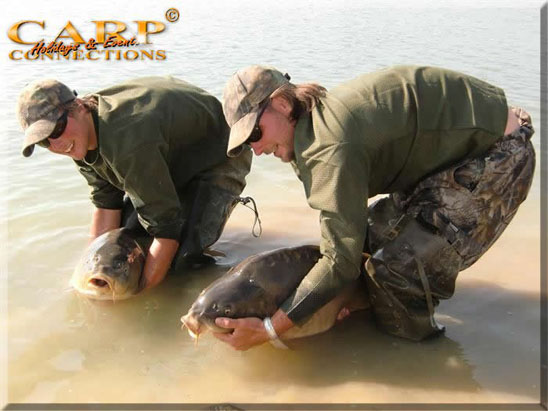 From that point on things became a little hectic for us to say the least and by regularly casting our heavily glugged bags to areas we had seen fish we were getting takes one after the other! Several times we had multiple takes with up to four fish lying in the folds of our net waiting to be weighed at any one time. The action was coming thick and fast and had put us way out in first place come Saturday afternoon when we had to reel in and go for a barbeque with the rest of the competitors.

The barbeque was great with some fine French wines, beers, cheese and sausages being consumed by all. It also gave us all a welcome break from the fishing and a chance to catch up with friends we had not seen for a while. The barbeque lasted around 2 hours before we made our way back around to our swims. It didn’t take long and before the marshals had even got back around we had four fish waiting to be weighed and a fish each being played in! The fish were dealt with and the rods were cast back to there chosen spots and the action continued right through the night. Come Sunday morning we were on around 30 fish for about 500lb+.

Although we were way out ahead by this point we didn’t put our foot on the breaks as other people were catching consistently and we didn’t want the gap to tighten. Around mid morning on Sunday things went crazy again and we had every rod going off in quick succession resulting in a further four fish lying in the folds of our nets. The fish were all good weights with Graham landing two thirties to 36lb and me landing a 46.04lb mirror and a mid twenty. The brace shots were taken of the two biggest fish and the 46.04 had actually put us in to first place for the biggest fish trophy as well. 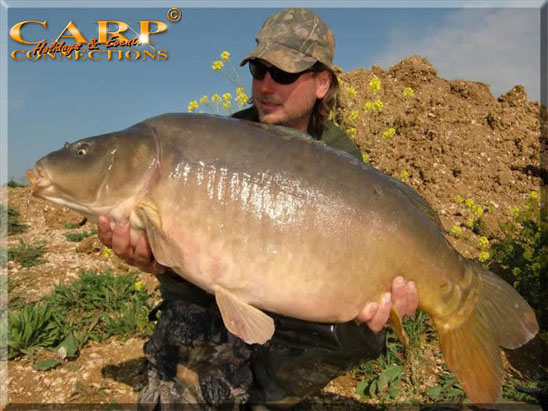 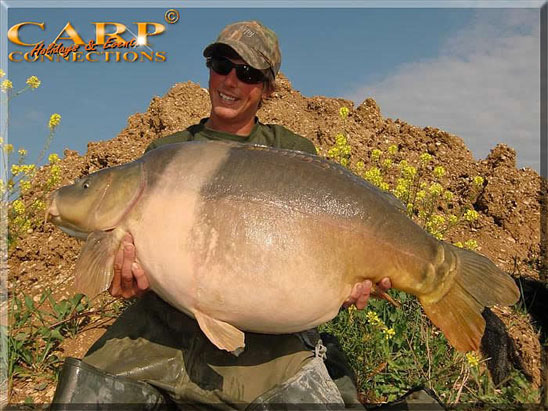 We were buzzing to say the least and at this stage of the competition we were way out in 1st place and with the biggest fish! With only a further 15 or so hours to go we kept up with the pace we had set and continued to land fish until the final hooter went. We were exhausted and could barley stand as we hadn’t slept for the past 3 nights but the feeling of victory kept us going! We packed all the kit away and made our way around to the gazebo where the presentation was about to get underway.

We were elated with the result and in the end we had banked no fewer than 67 carp for 1647lb. Second place were good friends of ours Barry and Ben O’Conner with 32 carp for 696.01lb, third were Carl and Alan Sharp with 20 carp for 542.12lb.

We were presented with our amazing trophy that was a carp that had been made from car hub caps, photos and congratulations etc were all made. We also picked up the trophy for the biggest fish for the 46.04lb carp that I landed on Sunday afternoon. It was a clean sweep for us and a brilliant way to start a busy year of competition carp fishing. Let’s hope our luck continues this year!