The Hunt for “The Pink One” – by Calum Kletta

Nearly 4 years ago I first set foot on one of the large gravel pits controlled by my local club. The lake is roughly 23 acres in size, much bigger than anything I had fished at the time! I spent the day catching some roach and the odd bream from short range, but big crashes out in the open water really captivated me and it wasn’t long before I wandered down the bank and spoke to the one of the carp anglers to see what he had caught. He said “Not much really, had a 28lb common 3 nights ago though!” This really sparked my imagination, as at the time my PB was only 17lb! As soon as I got home I was straight onto the Club’s website looking for pictures of fish, and more importantly information on the lake. It was a lake with a degree of difficulty, with a stock of 100-150 carp in its depths, but thousands of bream and tench that would prove to be difficult to get through. There were roughly 10 30’s, topped by a fish called “The Pink One” which regularly topped 45lb! It was decided – I wanted to fish that lake!

I did a few nights in the late autumn/winter of 2008, with only a few bream to show for my efforts, but seeing as nothing else was being caught – this wasn’t surprising! It wasn’t until the autumn of 2009 that I started to fish the lake regularly, starting with a session that began on the night of a bank holiday Monday. Me and dad arrived at the lake early afternoon to find the lake completely deserted apart from a guy packing up in a swim called Peg 9; he’d caught a few, so we dropped in after him. The rods were quickly sorted before dark, but it wasn’t until the morning when I got out the spod rod and laid a big bed of over 5kg of boilies out that the action kicked off! Over the next 36 hours I had 7 bites, landing 5 fish including a fish called “The Stocky”- a massive new PB, my first 30 at 32lb 2oz and a new PB common at 21lb 11oz as well!

The stocky- my first 30 at 32lb 2oz! This fish and session showed me how susceptible the fish were to a big bed of bait! 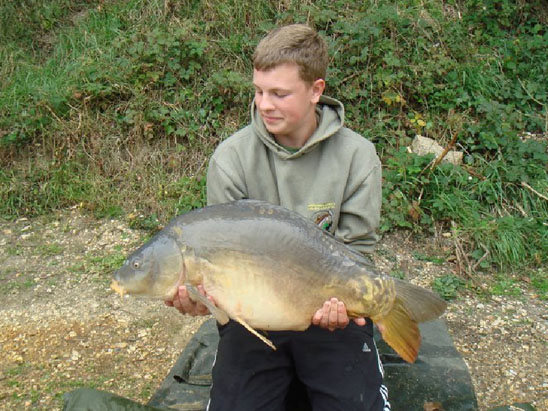 This session really got me going, and I was back at the lake the following weekend! I was disappointed to find the lake busy, but filled with confidence from my recent success I was soon set up in Peg 5, the next swim down from Peg 9. 3 rods were placed tight to the island, and I sat back to watch and wait. At about 5pm Saturday I began packing up, feeling a little down about the blank that was on the cards, when one of the rods ripped off! The fish came in easily initially, before chugging around in the margins and then going in the net. I took a look in the net, and was amazed to see a fish called “The Pig Linear”- another low 30! Hoisted on the scales they swung round to another new PB of 34lb 6oz – when your luck’s in!

“The Pig Linear” my second 30 in as many sessions! I was really getting stuck into the lake and learning more and more on every session! 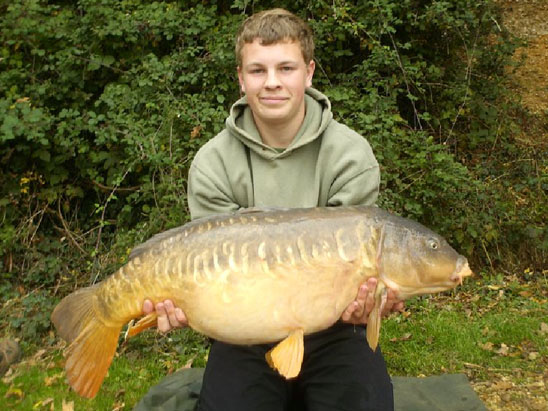 I really felt I was getting to know the lake and its inhabitants, but events conspired against me and this turned out to be my last session of the year.

It wasn’t until study leave kicked in at college that I started back at the lake, doing some revision and fishing at the same time! I did a day session in a swim called “Skank” that I had been baiting religiously with Shellfish B5 rolled by Kent Particles. The day turned out to be very eventful, firstly I lost one of the lake’s big commons (both over 30lb), which was gutting, but I did manage a high double, an absolutely stunning linear, which made up for it a bit! But once more other fishing distracted me, namely the BYCAC and going to France for a week. Again, all too soon winter had come around, and the fish had switched off – but this winter was spent formulating plans and marker floating the lake ready for a spring assault!

In February I passed my driving test, meaning that I was going to be able to get to the lake much more often, and to be able to do short overnight sessions after college. I felt this would be very important as I could keep a track of where fish were coming out and on what tactics. I would also be able to keep a stream of my chosen bait going in to get the fish used to eating it and finding it around the lake which I felt was very important for these pressured fish.