I run ‘For Life Experiences’ which is a full time Angling and Outdoor Pursuit organisation. We offer tuition and educational programs to people of all ages and backgrounds. I have also been coaching full time for 4 years. FLE has recently taken on the running of our own Fishery at Greenridge Farm, Ampfield.

I had a busy week last week as we ran a week long FLE Junior Carp Camp. On the Thursday night and Friday the juniors learnt how to carp fish and look after their catches during the period of darkness. During that 24 hour session on our FLE Top Lake, they caught 43 Carp up to mid doubles and had the privilege of being met by FLE’s friends Barry and Ben O’Connor, who came down to join the group for breakfast, have a chat and pass on their knowledge and a few handy tips and tricks to the group. It was a good end to the week and we joined Barry and Ben once our tuition group had left to walk the banks of my old stomping ground Broadlands Lake. It was hosting the UKCC that weekend and Ben stormed it and took first place.

On the Saturday we met early and headed to Shearwater lake with the FLE Junior Carp Team and practiced spodding over zigs, the young lads did well and banked over 30 carp in 20 hours and learnt a lot from the session. One of the youngsters, Connor, got to the final of the Junior BCAC last year and all of the youngsters are becoming really good anglers. So after a hectic 7 days of coaching I had all the wet kit in the back of the car but had a hunch that the fish might get on the feed after all the heavy rain so headed down the M27 to my Syndicate Lake. I arrived just before dark and found a few fish rolling on the point swim a little closer than my usual spots. I baited the spots with pellet and boilies before heading off to get some food and supplies, leaving the fish to gain confidence without lines in the water and to ‘get on the bait’. Nothing happened that night and I packed up for work at 6am a little surprised. I did however top the spots up before I left and saw another fish roll close in. 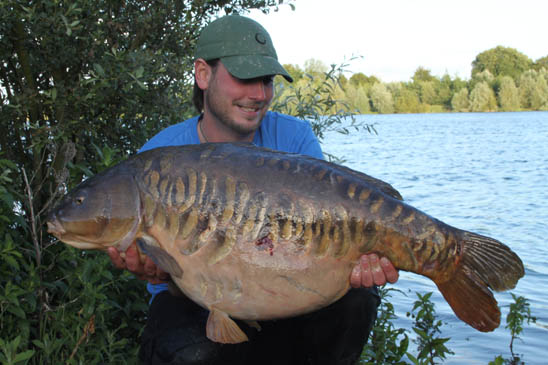 On Tuesday Tom, who works as a full time FLE Instructor said he fancied a cheeky overnighter so we finished coaching our groups ( we were fishing and giving tours of Sparsholt College on that day as it was the groups last day of an FLE ASDAN Education Course) and flew down to the pit. Although the wind had changed and looked spot on for the Outlet end of the lake, i just had a sneaky suspicion that whatever the fish had been rolling over a few nights previous may have held the fish, rather than them push off with the wind. I stood in the swim for 5 minutes and saw a fish roll and then another, all close in, only 30 yards out. I got one of the rods out and tied up a classic, ‘Broadlands Bomb’ bag with a critically balanced bait using the mainline Indian Spice Pop-up. I also put some halibut oil in the bag so if fish fed on the bag i could tell due to the slicks on the surface. I stood in the swim with the rod ready to go and saw another fish roll over, quite a chestnutty colour, the bag sailed out 5 foot beyond the ripples and i felt the bag down with a ‘donk’, spot-on I thought as I popped her on the rests and let out a couple of metres of slack line. I was fishing with 8 foot leaders of 25lb Gardner Mirage Flourocarbon pinned to the bottom with putty, combined with drop-off inline Gardner 3oz leads and 6 inch Gardner Trickster Heavy braid to a size 8 Mugga Hook.

I tied another bag up and sat on the bucket next to the rods for ten minutes in the strengthening wind and another fish popped his head out just to the left of the first rod. Within seconds a solid Gardner bag sailed out and again landed spot on the money. I slackened the line and put the Nano Bug indicator on and with that the first rod pearled off. I lifted into the fish and it started thumping about on the end, it came to the surface and I quickly called Tom on the mobile in my pocket to come and help with the netting, the fight was heavy and pretty unspectacular with the fish kiting to the left on the surface, rolling and lunking about, Tom walked into the water up to his knees to help the netting as the margins were shallow and then i saw the fish roll clearly for the first time and saw it was a heavily scaled mirror. At first i thought it was the un-caught fully which i had seen the year before at mid twenties but then when she started to ease towards the net I realised it was the one I wanted…… Scaley! In the net she looked massive and we got all the mats, slings and weigh gear sorted while we allowed her to recover in the net for five minutes. She was still fat with spawn and I wanted to let her chill for a while and get her strength back before bringing her out. 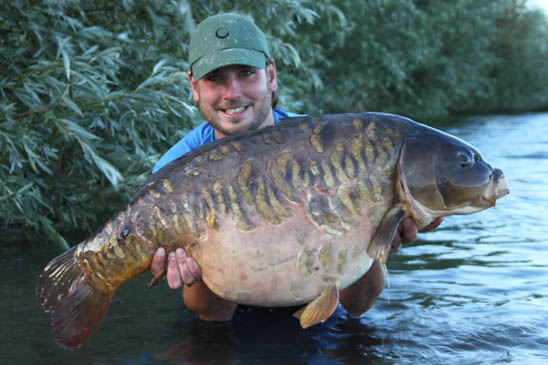 On the mat she was a star and behaved like a lady, showing off her good looks and basically blowing my mind! At 44lb 4oz she set a new PB that I have been trying to break for 13 years and as she swam away I punched the air in delight.

Tom managed to have a stocky that night and lost a good fish, We left to go and run another coaching session in the morning very happy and i think you will agree from the pics she is a peach of a fish. She had a little scale damage which we treated with a Carp Care kit and held her in the water and waited for her to kick off powerfully back to her clearwater home. The fish was caught on a new set of custom Freespirit Hi-Sive rods which i have to say are unbelievable, forgiving enough to play fish but have the casting power to put a lead miles. Christened in style.

This year is off to a flying start with FLE winning the Media Carp Masters against some of the best competition carp anglers in Europe a few weeks back – 67 fish in 63 hours for a total weight of over 1600lb! (about 1000lb more than 2nd….. and 2nd and 3rd were using a bait boat, we were casting, its just not cricket with a boat!), our FLE / Freespirit British Carp Angling Championship team is sitting in fourth with one match still to fish at Broadlands (we won that qualifier last year so are confident of a good result) and now with a new PB and tuition’s booked right through the year it is happy times at FLE……. Even if you can’t use white bread on our fishery :)

NEW NEWS….. Just got back from the Carp In For Cancer competition on Bradleys and we won that and also took the biggest fish prize!
Donated the prizes back into the charity auction and raised over £550 quid for the charity…. excellent event… brilliant cause and two wins out of two matches this year, roll on this weekends BCAC round at Broadlands! 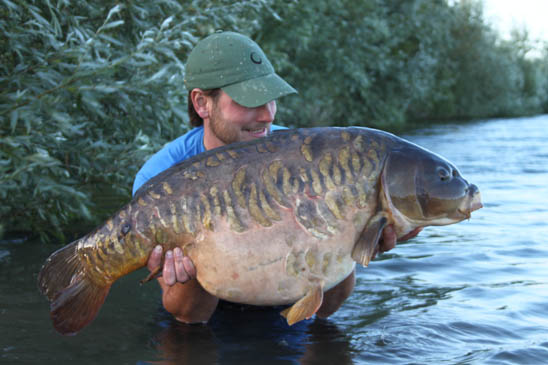