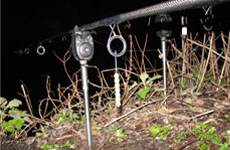 I have been fishing a stretch of the Kennet since October last year and have had a few fish to around 8lb, and was determined to beat my PB of 9Ib 14oz, something I thought would be easier than it appeared. Over the years I have had plenty of Barbel from numerous rivers but never quite got into double figures.

The stretch I chose holds some monsters and I wasn’t going to give in my quest before the season ended (in fact I am writing this piece as quickly as possible to be able to get down the river and utilise the last 6 hours I have left!!!).

Having put some serious time in over January and February, putting up with some pretty cold and wet night sessions, I was really keen to get that catch. Conditions were challenging, and the combination of the temperature and fluctuating water levels seemed to be playing havoc with the fish switching onto feed. During this period I managed one Barbel during and numerous chub to about 4lb.

With a stupidly chilly campaign which failed to produce on the Thames, I decided to switch back to the Kennet. I was supposed to go to London for a friend’s birthday on the Saturday night but got a hunch/feeling and I had to cancel last minute and follow my heart to the river (worrying when you turn down a massive party with good friends for fishing) but as I work on the Thames doing environmental work, and could see that the conditions looked amazing on the Thames I knew the Kennet would look even better.

The weather had warmed up a great deal and the air pressure had dropped significantly. It just smelt good!!!

I rushed home, obeying all speed regulations!!! Grabbed the kit and then headed down to Basingstoke Angling Centre to get a couple of bits. Whilst in there one of the staff mentioned he had just had his first ever Barbel at over 10lb. I was over the moon for him but at the same time was a little miffed that after all my years of fishing and I still hadn’t managed to get a fish of this size. I expressed my thoughts after congratulating him and wished them well.

On arrival to the river I was shocked to see no other anglers on the stretch. I quickly checked the date as I thought I might have lost a couple of days somewhere and the season had already ended. Nope, all was good! I went straight to a swim which has been known to produce a few good fish. By good I mean well over the 13lb mark.

Everything was in place, so now all I had to do was sit and wait. The bivvy went up and I was home for the night, a brew was made and dinner consumed.

I had had a long day so was out for the count by 9pm. I knew I was not likely to get a bite until later in the morning when I had had most of my bites from the chub and the Barbel so there was no point in staying up.

At 11pm on the dot the near side margin rod screamed off, I launched myself at the rod still in the sleeping bag and began playing a good fish. It actually felt like a good chub all the way to the net. It was until I tried to get it in the net I realised it was not a chub at all but a Barbel and not just any Barbel, it was massive. I left it to recover in the net whilst I calmed myself down and got the camera, scales and unhooking mat sorted.

The rod went back out and I sat and had a moment or two before it finally sunk in and I phoned just about everyone on my phone book!!!

Everything was pinned down nicely as I like it using Gardner’s Critical Mass in brown. I always find it easier to fish a carp style set up when doing a full night as it is very difficult to stay awake all night watching the rod tips. The main changes I make are to increase the length of my hook link and also increase the length of my lead core and then use some Gardner Critical Mass to weight it all down in the right places.

Well I think that just about covers it.

I am having to deal with the grief of not attending the party but I think it was worth the sacrifice. I just hope that one of the larger fish that are present there will be kind and come my way over the course of this year.

So far this year one target completed, I will be moving onto a lake which holds a 49lb mirror and 37lb common next week, let’s hope the gods are looking on me with favourable eyes again!!!