After another long and cold winter of sitting at home wishing I was out fishing, we were into the middle of February and with spring fast approaching I planned to get out for a much needed session. I was only able to fish for 24 hours so when deciding on which venue to fish I was thinking the best option would be to go somewhere that has a good stocking of fish, giving me plenty of chance for a bite. 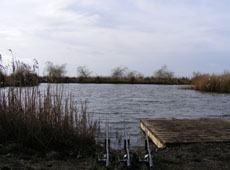 I opted to fish a local club lake which I had fished before with great success throughout the winter; the lake is around 6 acres in size with an average depth of 5ft. It has a good head of carp in the lake with a lot of fish being over 20lbs and 30lbs, big fish are few and far between in the winter months so this was an ideal venue to be in with a decent chance of catching a lump.

I regularly check the weather forecasts prior to a session so I can get an understanding of where the carp may be located in the lake or how they might be behaving. The weather leading up to my session had been good with no frosts for over two weeks, reasonably mild temperatures of eight or nine degrees so I knew the water would have been warming up nicely and the carp would most definitely be waking up and in search of food. The day before my session started warm south westerly winds were forecast for the next few days with temperatures of fourteen degrees during the day and no lower than seven degrees at night, this was perfect! This kind of weather is above average for the time of year and I was really excited knowing that I would have an amazing chance of catching a fish or two.

When arriving to the lake I was to find no cars in the car park and no anglers fishing, I couldn’t believe my luck. The mildest weather we have had this year and I had the whole lake to myself, result! I chose my favorite swim on the lake that I knew produces a lot of fish throughout the colder months as the average depth of the swim is a couple of feet deeper than the majority of the other swims on the lake and the carp really like to hold up in this area. The wind was blowing directly into my face and I had a really good feeling about what the session would bring. As I have fished the lake in the past my approach was to be bright pop ups fished with small pva bags cast into the holes in the weed, also I would start with one rod on a Zig rig because of the warmer conditions I felt that some of the carp may be up in the water column.

How the session unfolded 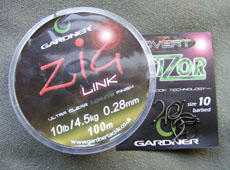 I put my first rod out and before I could even get my second rod out of my rod bag my alarm was in melt down and I was into a fish straight away! I landed the fish successfully and it was a mirror weighing in at 16lbs 8oz, this gave me loads of confidence and I couldn’t wait to get all of the rods out. I managed to cast all three rods out spreading them out across the swim hoping that I could induce a bite from one of the bigger residents in the lake. After the first hour I had landed 3 fish up to 18lbs and all of the fish were caught on the same rod which was being fished with a pop up and a pva bag, I was getting loads of liners so I knew that there was a lot of fish present in the swim. I was unsure whether the fish were up in the water after all but before I knew it my rod that was being fished with a Zig rig was away, after an intense battle I landed the fish another mirror of about 15 – 16lb. The fish fell to a 3ft length of 10lb Zig link tied to a size 10 Covert Incizor hook and the chosen hookbait was a CC Moore 12mm white northern special pop up. Over the next couple of hours it was manic! I landed 8 fish but not one twenty, I was starting to wonder if I was going to be fortunate enough to catch a lump this session. I had obviously got the tactics spot on as I was hauling and I had only been fishing for three hours so it was only a matter of time before I hooked into a decent fish. I didn’t have a run for about an hour, so in this time I managed to get a bite to eat as I literally had been non – stop since I arrived to the lake. 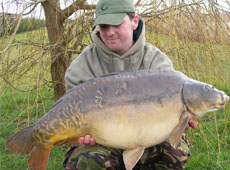 With only one take on the Zig rig I decided to switch it over to a pop up and fish it on the bottom, I recast all three rods with fresh bags and waited patiently for the next bite. Almost instantly after I recast, my indicator was twitching on the rod that I changed over from a Zig rig and seconds later my bug indicator smashed up into the alarm and I was in again. As soon as I lifted into the rod it instantly felt heavier than the previous fish that I had landed, the fight was very different as the fish was kiting and plodding very slowing. After 5 minutes the fish was ready to be netted and I could see it was a bit of a chunk, I slipped the net underneath the fish and it was mine. A mirror which tipped the scales round to 31lbs 4oz, I was chuffed! My efforts finally paid off and I managed to land a winter 30. After taking pictures and getting the rods back out on the spots I felt so relieved to have finally landed one of the lakes bigger fish. Before I had time to sit down I was in again to another fish that weighed in at 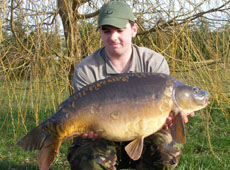 25lbs 10oz, two big fish on the bounce! I slipped the fish back into the water and when doing so my middle rod tore off, I was into another fish yet again! Unbelievable! This fish was going mad kiting right across the swim from left to right and it managed to lock up solid in a weed bed at about 30 yards out, I laid the rod down on the rests, slackened the line but instantly it tightened up again and I had contact to the fish. The rest of the fight was a bit scary as I had a small ball of weed attached to the line but I managed to slip the net under another big fish and I thought it could possible go over the magical 30lb mark again, it was a mirror which weighed in at 31lbs 12oz I couldn’t believe it two 30’s in three casts and a 25lber in between them, what a cracking result! I had a quiet spell for about 2 hours after this, but just before dusk I managed to land a 27lbs 6oz mirror and this took my tally to 13 fish.

I woke up at first light surprised that I had no action at all, which was very strange considering I was hauling consistently throughout the day before and I didn’t think that the fish would leave the swim. So I decided to recast all three rods back out with fresh pva bags, normally when fishing in weed recasting will could potentially get you a quick bite as you may hit a clearer area amongst the weed and this can lead to better presentation. Within twenty minutes of recasting i had a take on my middle rod, I managed to successfully land the fish and it weighed in at 26lbs 8oz which was a great start to the day. Two fish crashed out in the swim directly over the spots I was fishing towards so I was super confident I could have a few more fish before I had to leave. I started getting liners again so I knew it was only a matter of time before I would receive my next take. I decided to tidy my gear and get packed down so I could concentrate more on the rods before I left, as soon as I started to load the barrow I was away on my right hand rod and I was in once again I was playing the fish in the margin and one of my other rods rattled off, double hook up!! After a manic 10 minutes I safely landed both of the fish and they were mirrors of 22lbs 10oz and 14lbs. All of the fish succumbed to a 10inch 15lb Sly Skin Camo brown hooklink tied to a size 10 Covert Mugga hook baited with a CC Moore 12mm white Northern special pop up. Once all my gear was loaded onto the barrow I just had my rods to pack away which I laid on the deck so I could pack away my rod rests, I reeled in the first rod and went to put it onto the rod bag and my left hand rod starting screaming off on the floor, I was in! I landed the fish and it was a stunning mirror of 21lbs 6oz. What a way to end this awesome session! 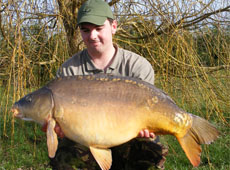 I ended up with 18 fish and 2 lost in 24 hours, my haul included 6 twenties and 2 thirties with the biggest being 31lbs 12oz. What a cracking result for this time of year, it was well worth the trip and hopefully a good sign of things to come this year.